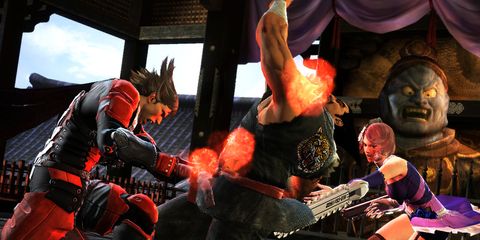 The King of Iron Fist Tournament has been hosted countless times, but fighting game fans often remember Tekken Tag Tournament the most fondly. It’s taken over a decade, but Namco Bandai is finally making a sequel to the classic arcade fighter, and it’s flashier and more frenetic than ever before. This 3D brawler is the perfect entry point for fighting fans who might’ve previously been cold on the franchise--just make sure to mentally prepare yourself for a virtual gut check if this is your first Tekken game.

For those who don’t recall 1999’s original Tag Tournament, Tekken Tag Tournament 2 takes the same framework and three-dimensional engine from the principal Tekken entries and spices things up with tag-team action. If one fighter is all you need, TTT2 will oblige you, buffing your lone pugilist with health regeneration and tuned damage so they can fly solo against teams of two. But the real fun is in the tag battles, which end when any one fighter gets KO'd. Having the split-second tactical option to switch between your pugilists during a particularly juicy combo, or frantically trying to tag out your fighter as their health bar continuously dwindles, gives the moment-to-moment gameplay a frenzied urgency that’s as nerve-wracking as it is fun.

Through some technological wizardry, Namco Bandai has managed to squeeze more graphical power out of the current generation, producing visuals that are even cleaner than those in Tekken 6. The expansive roster is practically a who’s-who of the entire series, with over 50 characters and counting, thanks to free day one DLC. All of your old favorites return in fine form; the fighters all have a unique grace and movement to them that will entrance onlookers and makes controlling them a treat.

The technical improvements aren’t limited to the graphics, either--Namco Bandai paid close attention to fans who were disgruntled with T6’s unreliable online play, making the call to port and improve the already-great netcode from Soulcalibur V. Online matches are silky smooth more often than not; even if things start to stutter, the game will attempt to find its footing by slowing things to an even crawl, rather than abruptly disconnecting you.

TTT2 also offers a welcome (and free) stat-tracking web service, in the form of the World Tekken Federation. This always-on service records your every match and action, collating hours and hours of gameplay into an easy-to-comprehend report. You’ll also be able to band with your Tekken brethren through the guild-like Teams, imbuing the online play with a greater sense of community when compared to the competition. It’s a feature that can only benefit you, and it’d be great to see it become the norm in other fighting games.

If any one aspect deserves a special shout-out, it’s TTT2’s music, which is primarily phenomenal. You know that awesome African safari stage from Super Street Fighter IV, with the amazingly catchy melody? Imagine if every other stage had such a mesmeric, enthralling score, and you’ve got TTT2’s soundtrack in a nutshell. The hard-driving rhythms and pounding drum ‘n’ bass beats in some of the stage themes will have you so amped for the fight, you might feel like you’re actually about to spar. If the included music isn’t your speed, you can swap it out with the new Tekken Tunes feature--but quite honestly, you shouldn’t have a reason to.

It’s a good thing that the online play is so enthralling, because there isn't a whole lot to do in the single-player modes. There’s the typical selection of survival, time attack, and arcade mode; with so many fighters, they’re only afforded a storyline via an ending cutscene, and the plot will be entirely nebulous if you haven’t been following the recent Tekken entries closely (though it still offers more than the wholly storyless TTT). The practice mode is great, with visual demos for every last move and combo--but you might find yourself missing the genre staple of challenge/trial modes that got your fingers aching and your combos on point.

The standout single-player mode is the Fight Lab, hosted by the lovably bombastic Violet (Lee Chaolan’s gaudy alter-ego). Here, you’ll refine the basics of the game as you train up a personal Combot, purchasing new moves for his repertoire. It’s a light-hearted breakdown of the basic game mechanics, but you shouldn’t feel the need to keep playing if the frustration of later chapters starts to outweigh the fun.

Frustration can also come into play when you’re online, though through no fault of the game design: Controls are tight, characters are balanced, and the stages (now with some destructible walls!) offer plenty of space. But if you’re not familiar with the pacing, spacing, and juggle-heavy combos of Tekken and its 3D fighting ilk, you might find yourself getting brutalized by Internet opponents. You might fall into the trap of spamming the same ineffectual move, or crumple to incessant high-low mix-up attacks; just know that there’s a counter to everything, and you’ll just have to be okay with taking your lumps when you first hop online.

Funnily enough, TTT2 feels like an online-oriented package with a classic arcade air. Of course, nothing beats marshaling some buddies and throwing down in person--but if no one’s around, Namco Bandai’s made sure that challenging competition’s just an Ethernet cable away. If you’ve ever found yourself enjoying a Tekken game, TTT2 won’t disappoint.