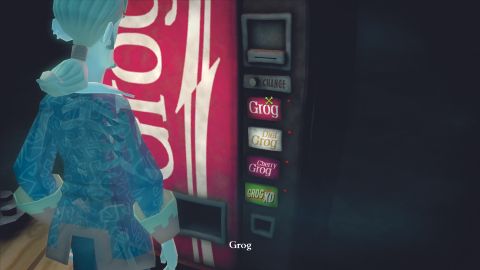 The end is here, the series that could so easily have been a thundering disaster has turned out to be a pleasant surprise, on the whole. Despite having perhaps some of the lowest lows of any major Telltale series, it also has the highest highs, averaging out somewhere in the “ah, that was nice” zone when you finish all five episodes. Most importantly, it leaves you wanting more, which is always a good sign.

Anyway, to the game. No spoilers here, but let’s just say Guybrush has ended up in a place reserved for those who aren’t as healthy as they’d like to be, and he has to find a way back to save his wife and so on. This episode contains everything that’s right and wrong with the series. The rehashing of character models is criminal, but the locations are interesting and the concept is engaging. This time, though, the puzzles are generally pretty easy, with only one or two moments that might be classified as tricky.

Generally, this is a bad thing, but the episodic nature of the new Monkey Islands means you’re wanting to just see how things turn out. Imagine a TV show that gets to its final episode and then drags itself out for too long, frustrating the viewer by not getting to the point. It comes down to whether you value puzzle difficulty over plot development. We lean more towards the latter, so we thought Pirate God was acceptably easy, but we know a few others disagree with that opinion.

One thing we didn’t like, though, was the structure of the finale. In adventure games, we never like being rushed, which is why we always preferred the old LucasArts games to the Sierra ones, on the whole. There’s little more frustrating than trying to examine your surroundings only for the game to then force you into a different bit before you’ve had a chance to think things through. It seems a strange thing to do, because every other time Telltale have used this system – the beginning of The Seige of Spinner Cay, for example – you’ve been able to control when you jumped to the next section.

This time, there’s no choice on your part, you just get shoved into it. It just makes you waste your own time waiting for the cycle to get back to the bit you need, denting the momentum built up during the rest of the game. Also, the length of the episode has clearly been artificially extended by creating lots of small areas that involve a deal of trekking between each one. It’s not that bad, but it does get a bit frustrating having to zigzag between these places all the time.

Having said all this, these aren’t massive blows to the quality of the game, especially when you take this episode as part of a large whole, rather than a one-off game. Pirate God is a worthy way to end this series; one that got better as time has gone by, even if some lessons were never really learned.
Telltale have produced a set of five vignettes that has in no way let the side down, remaining faithful to the original Monkey Island games, while providing a forward movement to keep things from getting stale.

If you’ve been holding out to see how things developed, hold out no longer. You can come out from your hiding place, safe in the knowledge that a purchase of this series won’t leave you peeling off your skin in anguish. While Tales of Monkey Island failed to hit the heights of Secrets of Monkey Island 2, as a new start for Guybrush, it’s a good ’un and it’s proof that Telltale have mastered the episodic game.