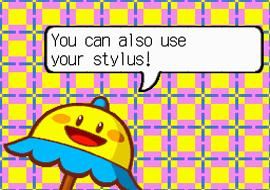 Mario's been saving Princess Peach's hide for more than 20 years now, so it's about time Bowser wised up and went straight to the source of his problems. With Mario and Luigi in custody there's seemingly no hope for the Mushroom Kingdom, right? Not if Peach has anything to say about it; she's dead set on running through familiar, sugar-soaked levels and rehashed stage layouts to bring the brothers home. Done before? Yeah, but Mario games are damn near unbreakable models of how to game.

Peach's power stems from her wildly fluctuating emotions, a side-effect of exploring Vibe Island. Have you ever tried telling a girl, much less a princess, that she's moody and affecting people around her? That never, ever slides. In this case, said girl uses her mood swings in a more constructive manner, pitting them against Bowser's cronies and the world at large. Crying causes plants to grow, giving you access to higher areas and can also extinguish fire-based monsters. Peach's womanly scorn engulfs her in a bursting flame that can burn bridges or torch unlucky enemies, while happiness creates a cyclone of good vibes that lets her fly and clears the air of any poisonous toxins. Finally, a state of calm slowly recharges the temperamental heroine's health.

In addition to her shattered psyche, Peach also uses a chatty, magical umbrella to bop baddies around. It also, somehow, eats enemies to recharge Peach's emotions. By collecting the ever-present Mario coins, you can upgrade the parasol with such enhancements as an energy blast and the ability to float. They're far from crucial, but using them is more fun than constantly jumping on things.

Running left to right is pretty hard to screw up, so Peach is as good as these action-platformers can be ... on the Game Boy Advance. The graphics, music and spectrum-spanning color effects are cute, but simple. The touch screen is used mainly to select which emotion you want to unleash, but hitting the L or R buttons instead of pulling fingers away from the action buttons would have worked better. Hardly a major issue, but putting this on the DS seems more like a stopgap title than tent-pole release.