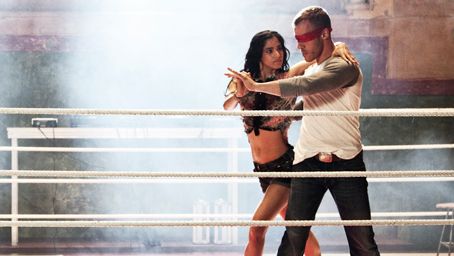 The charm of the first StreetDance surely lay in its defiantly British take on the Stomp The Yard / Step Up sub-genre.

So it seems both bizarre and self-defeating that its follow-up – directed, as before, by pop-promo duo Max Giwa and Dania Pasquini – should feature an American hero (Will Young clone Falk Hentschel) gathering a pan-European “crew” for a Paris “battle” he hopes to win with a “Latin-street dance fusion”.

Yes, former Britain’s Got Talent victor George Sampson is back in his baseball cap as resident artful dodger Eddie, while our own Tom Conti gets to recycle the same vaguely Mediterranean accent he used in Shirley Valentine as the protective bartender uncle of sultry female lead Sofia Boutella.

Given the Eurozone debt crisis, however, tailoring the movie for a continental audience looks spectacularly ill-timed, as does one girl hoofer’s decision to model herself on the late Amy Winehouse. Of course, those who helped this film’s predecessor crunk its way to more than £11m two years ago won’t be bothered.

All they’ll care about is the young cast’s inventive exertions that rarely fail to impress with their corporeal contortions and gymnastic dexterity. The problem is it’s the co-directors themselves who appear the most bowled over, judging by their tiresome penchant for isolating individual motions in pace-flagging slo-mo.

Still, it’s not half as tedious as Hentschel’s monotonous voiceover, a pointless embellishment in a movie whose slender story could be written on the back of a sweatband.

We can’t say the 3D makes much of an impact either, apart from one dynamic face-off with BGT runners-up Flawless and a thunderous climax in that big Coliseum next to the Eiffel Tower (you know the one).

Most of the time, though, you sense Max and Dania are struggling to find ways to use it. Why else would they have their multi-national ensemble have an impromptu pillow fight in their hostel bedroom?