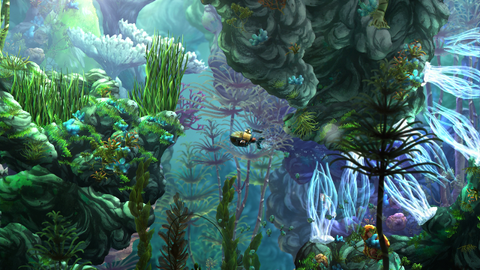 An undersea adventure that is more about seeing the sights than captivating gameplay.

Song of the Deep is haunting like the fathomless, briny depths it takes inspiration from. You’ll initially have a whale of a time bobbing about in the undersea wonderland, soaking up the amphibious ambience. But as you explore the ocean, culling marine life with torpedoes and solving the occasional puzzle, you’ll find the labyrinthine realm oddly bereft of substance. This is watered-down adventure, with a plot full of holes. Can water even have holes? Is that what bubbles are? Let’s move on.

The story follows the 12-year-old Merryn, whose fisherman father is lost at sea. After an unexplained vision of him being dragged beneath the waves by a gargantuan sea monster, the only rational course of action is for the young girl to cobble together a fully functioning, weaponised submarine from bits of junk caught up in her father’s nets. Off she goes into the crushing depths of the cold, merciless ocean, although you’ll have a hard time feeling as invested in this crazy endeavour as Merryn.

The game focuses more on exploration and puzzle-solving than combat, which is a good job, because the latter is a wash out. Enemies range from samey mobs that are less thrilling than a translucent jellyfish, to the rarer, larger variety, whose lumbering and repetitive attack patterns pose no real threat. All of them can be easily avoided, with the exception of one apparently invincible, immensely infuriating breed of squid who you can’t outrun, that has the inescapable pull of a celestial body. Happily, these are confined to tiny portions of the map, but you’ll be turning the air (or water) blue after a few encounters with them.

What’s your incentive to engage with these clammy combatants? Well, killing them opens up pathways in sunken cities that are inexplicably linked with their demise, and - perhaps more importantly - also nets you coins which are dropped when they die. Your shiny doubloons can be handed over by going to an entrepreneurial crab who’s set up shop on the seabed (yes, that’s really a thing), who will upgrade your submarine to do all manner of weird and wonderful things. Merryn could have spend all that money on hiring a rescue party, or buying some proper equipment, but that wouldn’t have made for much of a game.

Song of the Deep comes into its own when you start unlocking the abilities of your sub and poking around in the abyss. You won’t be able to progress without buying upgrades such as ice and lava torpedos, while others, such as a turbo boost and increased melee damage for your sub’s claw, are helpful but completely optional. The balance here is that the four torpedo types are essential for gaining access to hidden caves and caverns, and are useful for solving puzzles, but they’re not much use when it comes to enemies. There are some nice touches - you can grab a torpedo after it launches and use it as a shield that damages anything it touches - but it’s not worth it. The combat isn’t challenging enough to warrant spending the coin when you could invest it elsewhere - or, more simply, just speed through areas and ignore enemies altogether.

There are some sections that call for a modicum of skill, making you use a combination of abilities to create sharp pockets of exhilarating gameplay - like zipping around in your sub, boosting and dodging to avoid a torrent of missiles before plucking one up in your claw as it shoots past to launch back at an enemy - but they’re woefully scarce. This left me increasingly unsatisfied, especially after the cruel tease of what might have been. In an effort to elevate exploration and puzzle-solving, the combat feels unfinished and neglected.

Nowhere is this more evident that the boss fights. There are a grand total of two. One is in its proper place, at the end of the game, and the other stands guard in a cobwebbed tangle of caves. There’s plenty of going back and forth across the map, opening up areas to collect quest items; no one would begrudge the notion of a boss encounter in each of them. Some might welcome it. I don’t even like boss fights and I wanted to see more of them. Stumbling into a lone leviathan before the finale is disappointing. This is the sea, remember? There are supposed to be loads of gigantic monsters.

What’s more, the puzzles aren’t clever enough to make up for the lacklustre combat. The good news is there’s no handholding. Clues don’t flash up on the screen if you bob about doing nothing for ages, which is commendable, but the puzzles are so simple you don’t need them. This isn’t a bid to flaunt my intellectual prowess. I’m rubbish at thinking outside of the box. Heck, I didn’t even know there was a box. But if you’re going to overlook combat in favour of brain teasers, they need to be so devious as to make you want to drown yourself after the first few attempts (or at least prompt a 10 minute break and a sit down).

The exploration soon loses its charm once you’ve combed over the same reef a dozen times, fetching odds and ends to open a door here, or help a sick mermaid there. There’s a handful of warp points that you can use to fast travel, but it’s not enough to wash away the drudgery of it all. The game is also needlessly long, and the contrived fetch quests only draw attention to this. The story follows a similar theme. Intriguing strings of narrative are sadly left frayed and unraveled at the end, and the tale comes to a generic, rather humdrum finale.

Song of the Deep is a beautiful game, let down by uninspired puzzles, tedious travel, and listless combat. Promising concepts and mechanics are left unused. Insomniac had the admirable intention of promoting substance over style in a satisfying, subaqueous environment, but sadly, there’s no treasure at the bottom of this ocean.

Song of the Deep was reviewed on PS4

Song of the Deep

An undersea adventure that is more about seeing the sights than captivating gameplay.