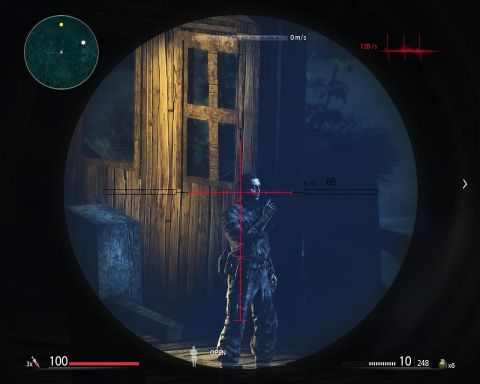 Note: An upcoming patch, expected to release around the end of July, claims to address issues raised in this review. See the bottom of this page for more details.

Snipers have it tough. They slog through dense jungles wearing hot and heavy ghillie suits. They have to sit and wait for their target for hours. And if they miss their shot, their cover is blown. It's a hard line of work, and it's an even harder one in Sniper: Ghost Warrior, where your enemies have x-ray eagle vision and the ability to shoot the wings off a fly from half a mile away, with a machine gun.

Sniper: Ghost Warrior is a first person shooter that sticks you in the shoes of an elite sniper (duh), and a few of his short range squadmates. Your goal is to creep through the jungle and shoot dudes from really far away. There's a story in there somewhere, but it's poorly told, and feels more like a design-by-committee kind of tale (people like their Americans to curse a lot and say "stay frosty" in their military shooters, right?).

This game borrows a startling amount of things from the Call of Duty series. From the menus and loading screens, to the button layout and animations, it's hard not to compare the two. That comparison really hurts this game. It's got some neat elements that could have made for a fun shooter, but because it cribs so much from a game that's far superior, it just looks worse.

Above: Those little blurs down there are enemies. They can totally see you from there, and they will kill you with two shots from their pistols

Those neat elements? They come in the form of the realistic sniper controls. On the hardest difficulty you'll have to account for wind speed and distance. Nailing a shot in a windy rainstorm from a mile away is satisfying, especially when you get to see it through the sweet bullet cam - an effect that follows some of your headshots from the barrel of the gun to a bad guy's skull. Unfortunately, you don't have access to the realistic sniper controls in the other difficulties, and if you want to keep your sanity, those are the difficulties you'll be playing.

There are several stealth sections in Sniper: Ghost Warrior and not a single one of them is fun. You've got a stealth meter that tells you how visible you are to the enemy, but it doesn't seem to matter. If you're not creeping through the jungle and taking out the bad guys in the exact order the developers intended, you're screwed. Enemies will spot your camouflaged commando from across the level, over buildings, and through dense foliage. Then they'll gun you down in an instant with pinpoint accuracy, or in some cases, the mission will just end. Even on the easiest difficulty, you'll have to retry some levels dozens of times before you find the right way through. There are a handful of thrilling scenarios that have you sniping fools left and right as you book it to several different positions, but overall, the stealth missions are an exercise in rage control.

There are a few missions that don't involve sniping or sneaking, but these are forgettable at best. Like Call of Duty, you'll storm an oil rig, bust down doors, and find secret laptops. The aiming and gun control in these sections feels loose and imprecise. The enemy AI seems dumber in these missions, often getting stuck in level geometry, but they're still just as deadly, even if they are facing the wrong way.

Above: You don't always have to use sniper rifles. Sneaking up for close range is risky though - the guards have eyes in the backs of their heads

There's a multiplayer package too, and it's predictably sniper heavy. Once you learn the maps, it can be fun to get into stealthy snipe matches against 11 other people. You'll spend a lot of time dying at first as you learn, but at least you're not dealing with the atrocious AI found in the single-player. If you're more of a run and gun player however, the multiplayer probably isn't for you.

Sniper: Ghost Warrior is priced below other new games, but even then, it can't compete against the games it borrows from. Without the AI and stealth problems, it might be a decent, if extremely derivative, shooter. As it is now, you're better off skipping this one. Note thata patch is forthcoming thatis supposed tofix AI issues. It specifically mentions adjusting enemy sight distance and improving your stealth effectiveness when hiding in shadows and foliage, so it may have a significant impact on the enemies%26rsquo; uncanny knack for blowing you away from across the map. Since the game is already available, our review score reflects the state of the game as it is now.