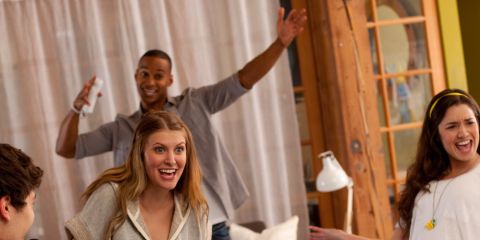 From the moment that Harmonix made microphone-based vocal stylings a big part of the larger Rock Band experience, the market for stand-alone karaoke games fell off (Karaoke Revolution: Glee excluded). Sing Party aims to redefine the individual singing approach with the Wii U GamePad. Considering FreeStyle Games' past success in adapting the Guitar Hero formula to a new format with DJ Hero, the studio was an apt pick to try and revive a tired approach with fresh tech. And while the result is nothing spectacular as a single-player offering, a number of novel additions and tweaks make Sing Party an entertaining party package.

Sing Party ships in a bundle with a single black USB microphone that plugs into the console itself. The actual game experience comes in two very different flavors: the kind of standard pitch-matching approach that we've seen in most other sing-a-longs, which is used for solo and team play, and then the fresh new party approach that makes a worthy contributor out of the GamePad.

Designed around the tablet screen, the game’s titular party mode is what makes an otherwise standard singing title feel distinct on the Wii U. Holding both the GamePad and the USB microphone, the lone lead singer can read the scrolling lyrics on the second screen (held vertically or horizontally) while facing away from the TV. Pitch and scoring aren't a concern here; instead, the goal is to get friends moving and singing along to the backup lyrics that appear on the TV screen, with the GamePad occasionally prompting you to encourage friends to clap, dance, or spin in circles.

It's a play for group participation, though Sing Party does nothing to enforce it; the actions are voluntary, and much like Just Dance doesn't really know how slick your moves are, Sing Party isn't keeping tabs on your buddies' harmonies. What it does particularly well is change the dynamic of party play, shedding the typical singing game approach of nailing the exact pitch and lyrics while staring at the TV in favor of focusing on communal fun. While it relies on players being extroverted and willing enough to bop along to optional actions, the result is a more pleasurable group experience.

Keeping the party going is also dependent on a stellar soundtrack, and Sing Party's manages to feel comprehensive without being overwhelming, spanning an array of recent hits and old favorites. Requisite smashes like Carly Rae Jepsen's "Call Me Maybe" and LMFAO's "Party Rock Anthem" expectedly make the cut, but the set also includes a solid selection of older tunes, including Queen's "Don't Stop Me Now," Fleetwood Mac's "Go Your Own Way," and The Monkees' "Daydream Believer." With 50 included tracks, it’s a pretty robust set, though expected DLC should pad things out later on.

For those who shudder at the idea of compelling friends to coo and cavort around the room, the party mode’s animated suggestions aren’t likely to please--but that’s where the more traditional play option comes in. As in most karaoke games, the standard Sing mode is all about nailing the individual performance. You'll set down the GamePad for this offering and simply focus on the fluctuating indicator on the TV, aiming to match the pitch and power while singing the displayed lyrics. It’s a familiar take on the genre--effective, but unremarkable in execution.

Along the way, you'll complete mini-missions by earning medals or singing a certain number of tracks, which increase your overall rank but don't seem to hold any meaning besides bragging rights. A second player can loop in using an additional Wii U microphone (sold separately), or you can hop into team mode to split your group into opposing squads, swapping the mic back and forth between allies during a single track. A non-singer can then award bonus points to the better team--again, just for fun--and build playlists using the GamePad screen.

That second screen can be used to change the audio mix during play and add instrumental beats to songs with taps of the screen; likewise, up to two spare Wii Remotes can be shaken to add tambourine and cowbell sounds. In both cases, the simple act of adding sounds is only likely to appeal to younger singers in the room. Without licensed music videos, Sing Party relies on an array of vibrant backdrops that feature shapes, speakers, and images from nature, and it all looks quite nice on an HD display. More notably, the minimalist approach during the Party mode looks quite nice, thanks to the bold, animated lyrics and sleek character models.

For living room loners, Sing Party might not seem worth a fuss, as the solo play more or less maintains what we've seen in earlier crooning affairs. But for those willing to command a room, the little nudges offered towards group interaction are a welcome addition--optional as they may be--and the interplay between the GamePad and the TV makes a faded genre feel just a bit more vibrant.