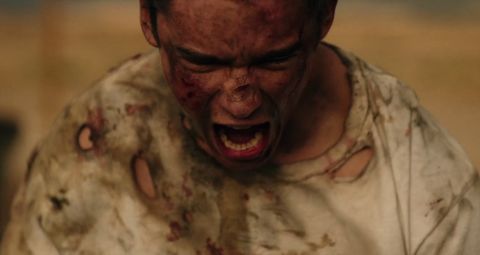 Not to be confused with the – excellent – 2007 apocalyptic portmanteau of the same name, cinematographer-turned-writer/director William Eubank’s second feature does share certain similarities. Like its namesake, it feels like three different films squished together, as if Gareth Edwards, Shane Carruth and Josh Trank had joined forces. Unlike the ‘07 Signal, it’s only one story.

Though it begins as an impressionistic road movie, segues into paranoid sci-fi, then morphs into something completely unhinged, The Signal has been made with much great care. The first, seemingly throwaway, scene shows Nic (Brenton Thwaites) limping past a kid playing one of those claw machines. Despite his crutches, Nic’s holding three coffees (so we know he’s determined), he draws a how-to diagram on the glass (so we know he’s smart), then gives the kid a dollar to keep playing (so we know he’s nice). Three minutes in, and already we’d follow this guy anywhere.

Nic and his nerdy friend Jonah (Beau Knapp) are driving cross-country to drop Nic’s girlfriend Haley (Olivia Cooke) at college in California. His degenerative disease is getting worse, so he’s pushing her away; she thinks they’re splitting up and can’t bear it. This story strand alone would be compelling enough to sustain most movies, but then the trio is lured off course by a mysterious hacker called Nomad to a spooky shack in the desert.

Act two finds our heroes quarantined, with mysterious physical ailments and Holocaust-style numbers tattooed on their bodies. They’re contaminated, their interrogator (Laurence Fishburne) tells them, and being monitored by unseen forces from behind two-way glass, a symbol echoed throughout the film in fish tanks, windscreens, even that original claw machine. It’s not the only allusion that doesn’t become clear until the loopy third act. Occasionally we cut back to Nic’s pre-illness days as a runner, watching him at a river bank, unsure about whether to wade in or go back – a lovely image of the crossroads he’s at in his life.

There’ll be no spoilers here, so suffice to say the three leads give smart, sensitive turns throughout the weirdness that follows, aided by Nima Fakhrara’s gorgeous score, David Lanzenberg’s cinematography, and some extraordinary effects. But this is Eubank and his fellow scriptwriters’ calling card, and it slips so elegantly between genres that you never know where they’ll take you next. Wherever it is, you’re in safe hands.