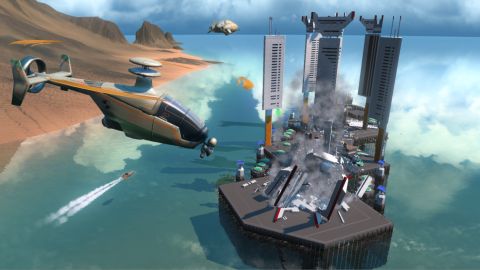 Screamride has a pretty impressive roller coaster building suite and some satisfying destructible environments, but everything else - from the other gameplay modes to its presentation - is a total snore.

Ever since games like RollerCoaster Tycoon and Theme Park gave me the key to my very own amusement park, I haven't exactly used my godlike powers of recreation creation responsibly. I'm less concerned with fair ticket prices and ample restrooms than I am with creating the most terrifying, nauseating, and deadly rides the world has ever seen. Along comes Screamride, which strips away the park manager pretense and instead gives me all the tools I need to inflict my victims with as much thrill ride PTSD as I possibly can. So why am I so bored?

As a new hire at Screamworks, it's your job to put your test subjects through as much gut-wrenching terror as possible, in order to test the limits of 'human excitement'. Y'know, for 'science'. As you earn medals in each of Screamride's three career modes, you progress through a series of different environments, each one bringing a new set of challenges and upping the difficulty considerably. The whole premise is paper thin, but it's not like I really need an excuse to send hapless human guinea pigs to their doom on a roller coaster from hell.

Now, I know what you're thinking: "I like destroying things. This sounds pretty neat. So why do I see two-and-a-half stars up at the top of this review?" That's an excellent question, and the answer is simple: Screamride is bland. Each environment is essentially a giant mass of water with a few themed bits sprinkled in to remind you you're in the 'island' or 'glacier' world, though these changes amount to little more than destructible window-dressing. The soundtrack is a generic mix of thumping dubstep or blaring drum-and-bass tunes. And all of this is tied together by a narrator who speaks as if her script was run through free text-to-speech software. You'd think a game about extracting terror from hapless human lab rats would be exciting, but the whole package just feels so dull and devoid of personality.

Screamride doesn't really know what the hell it wants to be, as two of the three Career modes have nothing to do with building roller coasters. Even worse, those two modes aren't very good. Roller coaster sims are supposed to be about building crazy rides and using them as cogs in the well-oiled machine that is your theme park. But in Screamride, there's no park simulation tying everything together, so each coaster and gameplay mode feels isolated and compartmentalized, with only a handful of track part unlocks and environment changes to give you any real sense of progression. Without that glue, an already lifeless game now has no direction or purpose, which in turn makes the gameplay feel even more artificial and disconnected.

Screamrider turns each of its roller coasters into a slot-car racetrack. You have to navigate your riders around hairpin turns and through loops by managing the car's speed and lean, while timing button presses to gather turbo boosts. That's it. Later tracks add a few more obstacles, but outside of occasionally hitting the brakes to take a sharp turn, there's no strategy or depth to anything, with each course relying more on trial-and-error and rote memorization than actual skill.

Once you've finished crafting your roller coaster in Sandbox, you can ride it or share it online so others can experience it. Coasters can either be uploaded as completed levels (so players can 'navigate' them like they would in Screamrider), or they can be uploaded as blueprints (so creators can make further tweaks to your creation). But there's not much else you can do with them. Without that park simulation glue to hold everything together, each creation ends up isolated, leaving the whole process feeling aimless. Build something, upload it, gawk at it for a bit, and wonder aloud, "OK, now what?"

Demolition Expert fares a bit better, but is held back by wonky camera controls. It's basically Angry Birds in a three-dimensional space. You're given a few different pods, and you're tasked with launching them at various targets, buildings, and explosives, each worth a variety of points. Each pod has a different special ability; some have thrusters attached that give you more control over the pod's trajectory, while others will explode when you press a button. Sure, it sounds cool, but thanks to the awkward camera, it's often difficult to judge depth, leading to more than a few frustrating attempts before you finally figure out the right plan of attack.

At least shit blows up real good. Sure, the levels may be sterile and boring to look at, but it's highly satisfying to watch theses massive high-rises crumble to bits. There's a joy in the anticipation from the first 'crack!', to the next few, agonizing seconds, and then, suddenly - success. Most courses are filled with delicately placed explosives, and it's a very real possibility that a single shot can cause a level-sweeping chain reaction. It's pretty awesome when it works out.

Engineer rounds out the Career mode, and it's clearly the meat of the experience. Here, you're given a handful of track pieces, a few objectives and constraints, and are given freedom to complete them how you see fit. Building a properly entertaining coaster is a delicate balance between providing the maximum amount of excitement and keeping your riders from flying out of the car or crashing off the track. A boring track might keep everyone safe, but won't earn you any points. Too intense, and, well, there won't be anyone left on your ride to enjoy it. It's a lot of fun trying to come up with creative solutions to circumvent the constrictive box each level places you in.

Actually building those coasters is mostly painless, and navigating through individual track parts is a breeze. Want to throw in a loop? Press a few buttons and it's right there, ready to place in your track. Unfortunately, the same can't be said for the camera, which seems to fight you at every turn. Even with helpful on-screen prompts like angle markers and track highlighting, it's incredibly difficult to judge where your next piece is going to end up - and God help you if there's a building in the way.

This extends to the Sandbox mode, which basically takes away all of the pressure and lets you make whatever coaster you want, as long as you've unlocked the pieces by playing Career. So if you want to just want to ignore all the other modes and tinker away on some roller coasters, you can. You just won't be able to access many of the special, more interesting, death-defying pieces without earning the requisite stars. Of course, this means slogging through a bunch of stuff that isn't building awesome roller coasters.

Screamride sounds like it has all the right ingredients on paper, with impressive destruction physics and a powerful, if at times cumbersome, roller coaster creation suite. But it suffers from an identity crisis, and whenever it tries to focus on anything that isn't roller coaster creation, it falls apart. More joyful presentation could have made a big difference, but Screamride's world is about as exciting as Disneyland's Jungle Cruise ride. And at least Jungle Cruise has bad puns.

Screamride has a pretty impressive roller coaster building suite and some satisfying destructible environments, but everything else - from the other gameplay modes to its presentation - is a total snore.