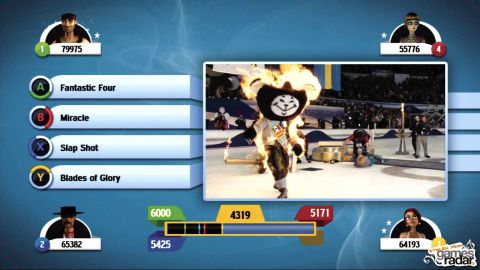 Gaming communities needn’t always involve internet cables and Xbox Live subscriptions. Though the days of frequent sofa-gatherings are almost over, they’re not entirely extinct, and so our Community monocle comes to pass over the third annual Scene It game; a multiplayer-centric film quiz surprisingly defiant in its lack of online play.

Yes, this is Scene It again, but not as we like it. Now a third party title developed by B-listers Artificial Mind and Movement (and without the all-important Microsoft Money), Bright Lights Big Screen severely skimps on the quality. Most of the rounds are mechanically identical to their forebears and there are even a few neat additions: the player in last place can now select round types and the dreadfully unbalanced end-of-round points bonuses are replaced with stars, redeemable against multiplayer bonuses. But disastrous presentation spoils the party.

It all feels terribly cheap. Somehow A2M has created a host who’s even more unbearable than before, and the funky avatar support of the previous game has been dropped entirely in favour of a troupe of twats. The blocky intro cutscenes have all the creativity and professionalism of a sixth-grade project, the bland shaded backgrounds are pathetically simple next to last year’s themed environments, and the film selection is easily the weakest in the series. The last thing you want to do when gathered round the TV with three other quiz-hungry, buzzer-clenching film fans is stick on something so cheap it wouldn’t belong in Blockbuster bargain bins. If this is the future of Scene It, we’re well and truly out.