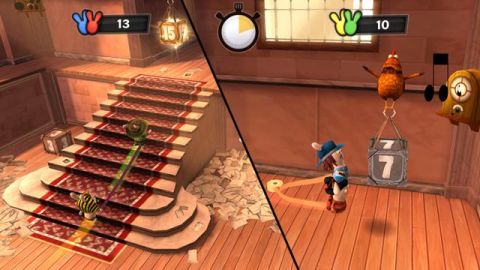 The lore of time traveling devices is one of deeply rich and storied heritage. There was the DeLorean in Back to the Future, a mythical hovercraft in HG Wells' famous novel, the amazing spaceship in Flight of the Navigator... and a magical washing machine? Yes, time travel has arrived to the ridiculous, flatulence-riddled world of the Rabbids, and they're on a crash course to make their mark on every critical moment in this world's history.

The game starts when you move your Rabbid on top of a toilet and flush him down. This game is all about class. That will send you to a wonderful and colorful laboratory filled with different time portals to send you off to a unique period in time. The lab acts as a hub world where you and friends can walk around and no doubt spend hours on end making your Rabbid shriek out that annoying yet hysterical scream that has come to define the Rabbids franchise.

Once you've had enough fun with that, you can enter into one of five doors, each of which will send you blasting off in time courtesy of a time-traveling washing machine, and trigger one of several minigames.

Minigames are preceded by cutscenes that show the little bug-eyed bunnies ludicrously thrown into various historical events. In one scene, the captain of the Titanic is so distracted by the Rabbids that appear out of nowhere that he crashes into an iceberg. In another, the Rabbids successfully manage to throw Apollo 11 off course. The scenes are chuckle-worthy, but only because anything those funny-looking white creatures are thrown into suddenly somehow becomes hilarious.

Okay, so when you actually get down to it, Travel in Time is really just a collection of minigames, which shouldn't come as any sort of surprise to those familiar with the Rabbids franchise. Here, the minigames are split up into five distinct kinds - shooting, platforming, fishing, flying, and racing. Players choose which time era they want to travel to, and then which type of minigame.

Like most Rabbids games, Travel in Time provides the most fun when you're playing with another friend or two. And even though it's on the Wii, it actually has online connectivity so you can play with other time travelers even if you may not have someone nearby who's dying to race around the Wild West.

Of course, the game delivers on its expected level of bathroom humor as well. From the moment you start the game, your Rabbid will have a piece of toilet paper trailing it throughout the laboratory hub. The cacophony of bodily functions shines through among minigames like "Flatulating on the Moon."

Rabbids games are built to fit one quality and one quality only: funny. They don't aim to be amazing pieces of game history, wow you with an awesome storyline, or . But they do want you to throw it out as a suggestion whenever you have a group of friends trying to decide what game to play. Travel in Time does nothing except fit into that mold. It's a romping good time, you'll get a laugh out of it, and hell, you may even start getting addicted to its simple mini-games, especially if you're in some sort of state of inebriation. But keep in mind that it's a game that you should really only break out when you've got people around and don't know what else to do.