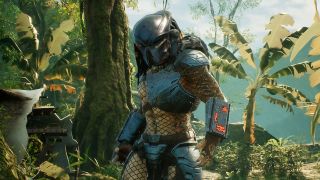 After the success of Friday the 13th, developer IllFonic has moved onto another classic movie property with Predator: Hunting Grounds, an asymmetrical shooter where players have to evade one of nature’s most deadly fictional hunters. Given that the game is dropping in early 2020, we thought it’d be good to run through everything we know so far about Predator: Hunting Grounds to get you ready for release. Read on for the inside scoop on gameplay, multiplayer, classes and more.

Predator: Hunting Grounds release date - when is it coming out?

Predator: Hunting Grounds will launch on April 24 this year for PS4 and PC via the Epic Games Store. It’s unclear if the game will come to Xbox One or Google Stadia in the near future. It was first announced during a State of Play presentation in May of 2019.

Predator: Hunting Grounds gameplay - how will it play?

The gameplay of Predator: Hunting Grounds will be quickly understood if you’ve played IllFonic’s Friday the 13th or Dead by Daylight. It’s an asymmetrical horror game, except the survivors now have a much more intricate arsenal to play with to take down the big bad. Teams are split between one person playing as the Predator and a fireteam of elite soldiers who can pick classes and customize their builds to ensure they can deal with the lurking monster at any range. This means having a team sniper to hack at the Predator’s health bar when it is skulking through the treeline, whilst other teammates boast shotguns and SMGs for close-range combat.

You’ll need a range of weapons in your squad because the game isn’t just about survival. The fireteam has objectives they need to complete in order to escape the dense jungle and get to the chopper. This means you’ll be fighting legions of goons, hacking hard drives and turning on generators to succeed, liberating outposts on the map that change dynamically with each set mission.

Due to the fact that the human team has a deadly arsenal at their disposal, the power balance is different from other games in the genre. If you can get eyes on the Predator and train your weapons on it, you have a good shot at taking it down, but any good Predator will know that the key to success in Hunting Grounds is to stay in stealth until a vulnerable moment arrives. Wait too long though and you’ll have to rush to take out the fireteam before they can escape and you lose the round. This creates a dynamic game of cat and mouse where either side can be on the front foot at any time. If the soldiers manage to take down the Predator, the fun isn’t over just yet, as you’ll have to perform an execution or the lone hunter will self-destruct and end the round early.

The Predator has all of its most-famous weapons to play with in Predator: Hunting Grounds, including the iconic wrist blades and the deadly plasmacaster which fires plasma bolts at long range.

Your tracking skills are much better than the humans too, with thermal vision available at the press of a button to spot humans and follow them through the map. The Predator can also use active camouflage to blend into their surroundings when spotted.

During the December State of Play presentation, a few more weapons were revealed for the game in the Ultimate Adversary trailer, including the Combi-stick and the Smart Disc. The Combi-stick is a spear that can be brutal up close but also thrown to damage enemies from far away. The Smart Disc is a multiple-target weapon that locks onto your enemies and takes them all out in one fell swoop with a remote guidance system, though you can use it up close to slash at foes too.

One of the ways in which the game distances itself from the more claustrophobic asymmetrical horror games in the genre is the map size. In Predator: Hunting Grounds the play space is huge and allows for a lot of experimentation, especially if you’re playing as the Predator. Given that the tasks given to the two teams are independent of each other, you can easily set traps and stalk the human squadron, pouncing on them when they’re at their most vulnerable whilst taking on the AI soldiers.

There are three Predator classes to pick from if you’re playing as the lone attacker. The Hunter class offers a balanced approach to battle, whilst the Scout is more nimble and better at stalking the humans. The Berserker is a brutish class that lacks agility but can tank and deal massive damage.

One of the other main reveals from the December State of Play trailer is that Hunting Grounds will feature a playable male and female predator. The female predator was introduced alongside a new weapon too, The Yautja Bow. The Yautja Bow is a deadly compound weapon that can trap enemy corpses against walls and structures. Of course, the difficulty is in the targeting, but the reward is sweet if you can pull off accurate shots from a stealthy spot in the treeline.

Those who are ready to pull the pre-order trigger on Predator: Hunting Grounds will receive a set of special in-game items related to the original movie, including an ‘87 Predator skin and an “Ole Painless” minigun for the fireteam. The Digital Deluxe Edition of the game is also available to purchase and offers 48 hours of double XP, five Field Lockers (which seem like Predator-themed loot boxes,) a dynamic PS4 theme and a digital artbook and comic. You’ll also receive a set of in-game items including a blue PlayStation exclusive armour and war paint set for the Predator and a ‘Battle Hardened Assault’ character to use for the Fireteam, which is being touted as an early access pull, indicating it might have to be unlocked later down the line via in-game progression.

what else is there to get excited about this year? Check out our list of the best new games for 2020 and beyond