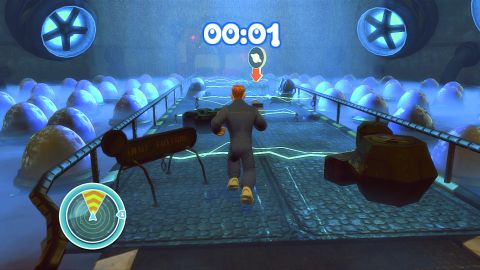 If it has nothing else going for it (and it almost doesn’t), at least the setting of Planet 51 looks the part. Green people whizzing around on Jetsons-like hovercars and hoverpods, with a nice amount of detail to the vehicles, characters and environment – it manages more than most tie-in games and provides an actual world to play around in.

Based on the recent animated film, the game sees you playing as a teenage alien and the human astronaut that crash-lands on his home planet, as well as an in-no-way-inspired-by-Wall-E probe robot. Lem and the astronaut, Chuck, are soon on the run from the police, and the best way to escape them is taking part in vehicle-based challenge missions. Obviously.

These include driving through checkpoints, delivering papers, ferrying cars between locations and beating gobby green children at races or demolition derby events. There’s a pretty wide collection of tasks, displaying the occasional spot of creativity – one job sees Lem driving a car that only works in reverse gear – but most feel like chores. Some literally are chores, like the tedious lawnmower missions. And what do you get for succeeding in these tasks? Stickers and multiplayer characters. Great.

The world may be fairly open and large, but there’s very little to get up to, aside from spooking pedestrians or bothering the game’s toothless police. It comes close to being the kids’ version of GTA, but forgets to implement a properly interactive environment, resorting to boring collectible-snaffling instead. This time around, rather than grabbing fruit or coins, we’re acquiring the scattered pages of a comic for some reason. There’s no joy to be had from simply walking or driving around, either – the game’s range of vehicles all feel maddeningly slow.

Planet 51 is an okay way to kill a few hours, if you’re really so time-rich you can afford to waste your precious life driving very slowly around a dull alien planet. It’s not horrendous, but it’s light-years away from great.