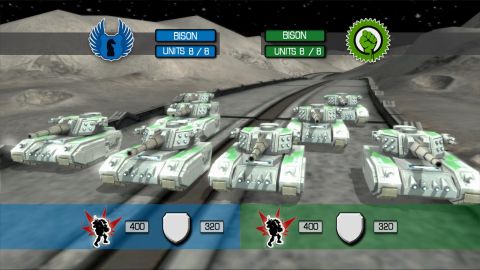 This is best described as a simplistic Advance Wars with all the colour – not to mention joy – sucked out of it. It’s a competent turn-based strategy game, sure, but compared to the more sophisticated efforts we’re used to, it feels bland and unexciting.

It doesn’t help that it’s set on the moon. All grey, grey and grey. Nor does it help that the game only gives you a brief gist of the plot before throwing you into the ‘action’ without an explanation of how things work. Not that you’ll need one given how simple it all is. Take turns to move your units around a hex-based grid. Gain bonuses for things like the kind of terrain you’re on, or whether there are any allied units nearby, and then engage the enemy. Get rid of every foe and you’ll be dumped into the next battle.

You’ll have done this kind of thing a million times over, and there’s little here to make you think outside the box. Not that there’s much wrong with that as such, but it doesn’t get us excited.