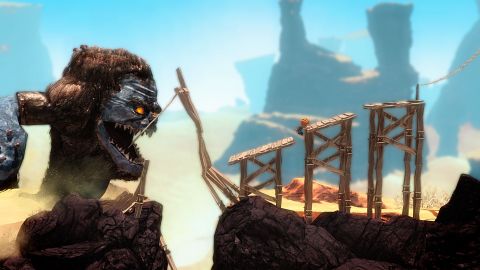 I stand alone at the edge of a wooden plank, staring off into the distance at two hanging vines and a tree branch; a massive chasm yawning below me. Farther away, a rope beckons, begging to be climbed so I can move onwards and upwards. At the moment, though, I have absolutely no idea how to get there. So I experiment; I connect one vine to the branch then chop it at its root. No luck. Next, I re-draw the vines to be hooked together, then cut one to swing near me. Nope, not working. Frustration begins to bubble beneath the surface, until a new idea dawns. Draw a new vine here, hook it to a branch there, make it swing as such, and voila! Feeling sufficiently brilliant, I hop onto my makeshift, Tarzan-esque contraption and move on to the next challenge.

Such moments are common in Max: The Curse of Brotherhood. Playing as Max--a rambunctious young boy who’s accidentally caused his meddlesome little brother to be carted off to a fantasy world laden with monsters and mystery--your only weapon is a magic marker that can manipulate the environment to navigate difficult pathways and conquer complex problems. Featuring devilishly creative puzzles and intense action sequences set in gorgeous environments, The Curse of Brotherhood is a platformer that's just as challenging as it is charming.

Max’s magic marker is the fulcrum of the story. Over time, it gains the ability to move the earth, create tree branches and vines, power plumes of water, and shoot fireballs. All of these abilities combine wonderfully with one another, giving Max just enough tools to move from one tough spot to the next, even if it’s not readily apparent exactly how to make that happen. The puzzles are punctuated by moments of sheer terror, as an array of fantastical monsters chase Max through ever-changing environments. Nearly perfect timing is required to avoid catastrophe. Each area has its own unique, hostile creatures, which take on the characteristics of their environment, such as a lumbering rock beast in the desert and fire-spewing giant inside a volcano. The penalties for falling into their grasp include being swallowed whole, crushed like a bug, or burned to a crisp. Luckily, Max’s constant deaths are never bloody or disturbing; that would damage the overall charm of the game.

Surviving those encounters isn't always easy. You'll inadvertently send Max to a painful death dozens of times throughout The Curse of Brotherhood. Missed jumps, slips on spiked animals, stumbles into molten lava, and 1,000-foot falls into gaping pits are commonplace. Thankfully, a superb checkpoint system means you never feel punished for such misadventures (although Max likely begs to differ). In fact, it invites experimentation. During later chapters in particular, powerful combinations of all the marker’s abilities are required to vanquish enemies. I found myself mixing and matching all sorts of combos to figure out just what to do. At many points I felt confused, but never got stuck for more than 15 minutes or so; the level of challenge was very well-balanced.

Above all, The Curse of Brotherhood is gorgeous. Each of the six main environments are lavish and bursting with personality. Vertical levels are particularly memorable--climbing to the top of a massive tree and the main villain’s castle are breathtaking at times--but they’re all distinctly challenging in their own way. What’s more, The Curse of Brotherhood invites multiple play-throughs due to the array of collectibles and Achievements.

There’s little to dislike about Max. Yes, there were a few moments when I wished that the controls could have been more precise when drawing branches or designing water plumes, but at no point did they ever let me down when it counted. It would have also been nice to get just a little bit more of an indication of what to do in more challenging areas; the narrator will occasionally toss out a hint but those are few and far between.

Max: The Curse of Brotherhood is a breath of fresh air that new Xbox One owners will be delighted to experience. As a charming experience from beginning to end--and one that can be enjoyed by all but the youngest members of your family--it hits all the right notes.