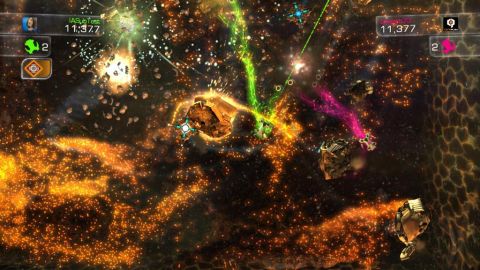 We feel bad for all the people who will probably take one look at Ion Assault and write it off as yet another generic arena space shooter. They'll be missing out on what's probably one of the coolest mechanics we've seen in the genre. Harnessing power from the latent energy fields around your ship, you'll launch bombardments of charged ions at foes until they overheat, reach critical mass, and burst like big space pimples. And yes, this is every bit as satisfying as it sounds.

Thought you signed on to be a fighter jock? Wrong. Your role in Ion Assault is more along the lines of an intergalactic garbage destroyer who just so happens to moonlight as an intrepid space ace when danger arises. Dropped into square arenas filled with asteroids and large chunks of debris, you must obliterate every last trace of the stuff in order to warp to the next area. Instead of being equipped with bombs and lasers, your ship can vacuum up ion particles from the space around it, charge them into a swirling mass, and spray it like luminescent buck shot. Debris or enemy ships this volatile energy comes in contact with will quickly heat up and explode, spreading even more particles into space for you to snatch up and wield. Another tip: you can also "cook" objects or opponents if you hold onto the building mass of hyperkinetic energy and fly close enough to them. Did someone say space BBQ?

The visual effects generated from all this ion sucking and blowing are very impressive, even if the particle explosions that blindingly erupt across the screen can get a little out of hand. This is intensified by the bevy of challenging alien adversaries that warp into your midst. You'll face everything from satellite laser turrets and pod laying alien beasts to sentient mines and separating battle cruisers. Hulking boss atrocities also provide moments of blood-pumping ion scrambling.

Ion Assault's gameplay is tremendously fun, though it has a dark side that won't sit well with some players. The aiming controls are awful. It's possible to accept this and still get lost in the excellent arcade-style particle anarchy, but that doesn't make them any less irritating. A firing scheme like the one found in Geometry Wars and other fast-paced shooters would have been perfect here. Oddly, the developers instead opted to force players to slowly rotate the aiming reticule around rather than letting them just aim wherever they point the right thumb stick. The only other issue to speak of is the brevity of the solo campaign. The four unique worlds each only have a handful of stages, and it doesn't take long to push through them. As such, the multiplayer modes are a welcome addition that extend play slightly. With a little patience, Ion Assault is still a solid choice for giving your thumbs a workout.