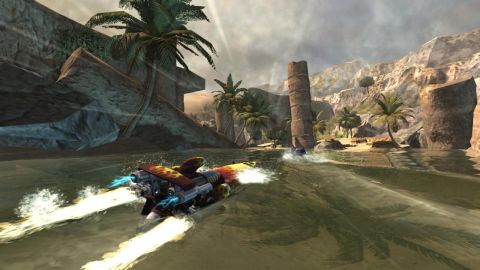 You know what, Hydro Thunder Hurricane? You have no right to be this damn fun. No right at all. What should be a cheap, lame throwback to arcade racing of yesteryear turns out to be a downright addictive, thrilling little downloadable game. We just kept saying “One more race…”

Above: A cool detail is how once you grab boost, the boat partially transforms into a more badass version of itself

Let’s stop a moment here, though. If goofy arcade racing or jet-jumping powerboats don’t do anything for you, then you may not have the experience we had. If plunging from 200ft. waterfalls, boosting off rolling waves to discover hidden paths, and the occasional crocodile or sea serpent on the track do sound like fun, then step right in, because we have the game for you.

Apparently some people think the original Hydro Thunder was crap. We only played it a few times back in the arcade and got the feeling that, while fun, something about it was a bit shoddy. Of course, we never reached advanced level of play. In Hurricane, with hours to devote, we learned the ins and outs of the eight tracks, and wow, is there layer after layer to peel back. Not only are there multitudes of secret shortcuts to discover, but so many of them are a thrill just to go through – you don’t just turn down a hidden route, you boost-jump into a tiny hole in the wall, smashing through a curtain of icicles, and then scrape down a completely frozen, weaving tunnel before bursting out ahead of the opposition.

While it’s true that the water in HT Hurricane doesn’t really respond the way water should, it is still incredibly dynamic. On one track, you grab an item that activates a wave machine. It’s not until you make it all the way back there on the next lap that you see the waves at work – and then you have to time your leap off a moving wave to find the secret shortcut. There’s a whirlpool that drags against you if you enter it in the wrong direction, but spits you zooming out if you pick the correct angle. Every boat leaves a wake, and if you get inside the whitewater at the wake’s center, it induces drafting, where you’ll pick up speed to overtake the opponent.

Above: You can't use the overpowered "smash through the opposition with boost" tactic from the original Hydro Thunder. Once you've drafted an opponent, you'll either have to weave around him or jump over him

Speed is what every racing game needs, and HT Hurricane knows how to wring every drop of tension from its sensation of momentum. The weird part is, the feeling of careening velocity doesn’t come directly from how fast the boats go, but rather from the track design. The way that corners and narrow passages come hurtling at the camera and the way that great plummets throw columns at you up from the depths all trigger something in the human nervous system. The traditional red and blue boost icons are placed in smart locations: the red ones give you more boost, so they are usually in the harder to reach spots. It’s possible to be nearly always boosting if you know where the icons are, and with the added skill of changing your direction in mid-air by boosting, there’s never a shortage of speed-induced rushes.

While eight tracks might seem a bit light for a full-priced game, Hurricane can’t attempt to compete with retail racers in that department. However, it still manages to make those eight tracks surprisingly replayable. First, there are all the secret routes to discover. Then there are the hidden Hydro Thunder icons that unlock extra goodies. But most importantly are the Ring Master and Gauntlet challenges.

Above: These yellow rings are from the intermediate difficulty. On Expert, they're even smaller, and sometimes placed in tricky spots

Ring Master sounds like a boring concept – you race on the same tracks, but instead of racing against opponents, it’s a time trial where you drive through ring-shaped gates. This mode actually turns out to be the most intense of the three, because every ring you pass through grants you boost. If you’re doing it right, you should be boosting literally non-stop. Flying along at top speed, flames shooting out the back of your boat, hitting the brakes into the turns (but not stopping the boost) is unbelievably tense. And with each difficulty level, the rings get smaller. This mode also serves to get you to explore the tracks fully, because it leads you on a racing line you wouldn’t have done otherwise.

Gauntlet mode is another time trial, except instead of rings, you have exploding barrels to deal with. They’re not just scattered randomly, but rather floating on the outsides of corners or along the edges of narrow corridors. It makes you race like a pro, and also provides some nail-biter moments when you almost slide into a barrel, but then boost-jump at the last second and fly over the trap. There are also a few places where avalanches tumble into the water and huge waves send all the red barrels flying up menacingly into the air.

To round out the modes, there are the Championships and multiplayer. The Championships are essentially circuits, pitting you against a series of events, where you compete against AI in races and in beating their times in Ring Master and Gauntlet. It doesn’t bring anything new to gameplay, but raises the stakes by forcing you to perform consistently well in multiple modes in a row. The multiplayer offers four-player splitscreen, which is quite the rarity these days. We tested it out and found that it runs quite smoothly, although it looks like the textures have been downgraded to keep the framerate up – but of course it doesn’t matter much when your screen real estate is so small. You can even play online along with your buddies sitting next to you on the couch – the four-player splitscreen can be taken onto Xbox Live against other players.

Above: You're going to tell us this doesn't look fun?

Despite appearing to be a throwaway, light-hearted and goofy racer, HT Hurricane actually has an utterly hardcore heart. You won’t see it until you get to the Expert level events, but make no mistake – in order to earn gold medals in the Expert events, you’ll have to make flawless runs, and doing so is nothing short of taking a buzzsaw to your nerves. It will be interesting to see how the competition ramps up online, although this assumes enough people will buy the game, and of them, enough will be serious racers.

Perhaps that is Hydro Thunder Hurricane’s conundrum: it looks like racing junk food, but is in fact totally hardcore. We’re betting many players will give it a whirl and dismiss it as shallow before ever getting to the serious, beautifully crafted design underneath. A co-worker came by while we were playing it, and took one look and said, “Wow, that looks like the year 2000.” When we asserted that the game was, in fact, fantastic, utter disbelief was the response. Like we said before, HT Hurricane shouldn’t be this good. We’re sure glad it smashed our expectations.