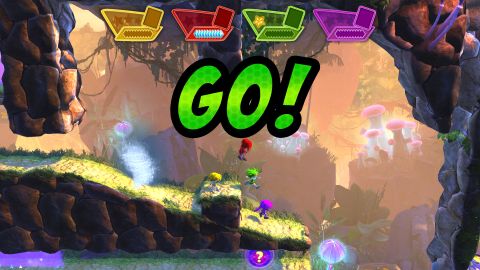 A promising concept is steamrollered in a game that doesn't really work as a platformer and breaks down entirely as a racer. We'd rather be kicked in the shins for eight hours than play this again.

The revival of the Giana Sisters has to be one of the most unexpected comebacks of recent times, but 2013’s Twisted Dreams suggested Black Forest Games had enough talent and ideas to make the siblings’ career renaissance worthwhile. Two years on, Dream Runners has us doubting that initial assertion: this multiplayer platformer-cum-racer is one of the worst games we’ve played all year.

This is surprising for two reasons. Firstly, it’s a solid idea: a racing game in the vein of Mashed or Micro Machines where the object is to get far enough ahead of your opponents to push them off the screen – only here the race takes the form of a platformer. The Gourmet Races in Nintendo's Kirby games are perhaps its closest relative, but there’s little else quite like it. Second, it borrows plenty from the fairly decent Twisted Dreams, and we’re not just talking some thrifty asset reuse.

Like that game, it’s about racing through gaudily coloured environments, collecting gems and bouncing on enemies to kill them. Even the switching mechanic returns, though rather than triggering the change from sunshine and flowers to red skies and doom clouds with the push of a button, you pass through dream gates, prompting environmental shifts designed to confuse or slow your rivals.

Trouble is, none of it works. Each of the nine stages – with genero-names like Soarstone Crag and Stranglevine Ruins - have to function as both platform stages and race tracks, and the level design simply isn’t good enough to accommodate both. The loose handling of the sisters, an occasional issue during Twisted Dreams’ more exacting sequences, is a constant problem here.

With feeble sound effects and a necessarily distant camera, there’s no sense of connection to the world. Dreadful audiovisual feedback and environments that rarely seems conducive to flow mean every race has a halting, staccato rhythm. Most of the time, it looks like four drunks with severe hamstring injuries trying parkour for the first time.

Because the action is so zoomed out and the levels so visually busy, it’s often hard to tell quite what’s going on. Power-ups add to the confusion: they’re both entirely forgettable – well, apart from the one that allows you to drop three large pink owls behind you – and have negligible effect on your opponents. Being stunned slows you down very briefly, but since all four competitors spend roughly half the race in a daze, it rarely makes a tangible difference to the outcome. There’s a dash move that can be charged up, but it’s so hard to reliably control that as often as not you’ll end up bumping into scenery and getting pushed out of contention.

Races can drag on interminably, too. Once the fourth-placed racer has disappeared from view, a countdown will kick in to end the race early, with a star awarded to whoever’s in first when the timer hits zero. And yet hitting the front often leaves you so close to the edge of the screen as to be unable to react to any incoming hazards, leaving the pack so tightly bunched that it can take several minutes before anyone is far behind enough to drop out. Then again, we were inexplicably awarded the decisive third star in one race despite being well back in last place.

It improves as a local multiplayer game, but that’s not saying much: shovelling dog eggs is more fun with friends, too, and we wouldn’t recommend you spend eight pounds doing that. Throw in bargain-basement presentation and the most offensively boring Achievements imaginable, and it’s clear the Giana Sisters have a long way to go before they can consider themselves Great again.

A promising concept is steamrollered in a game that doesn't really work as a platformer and breaks down entirely as a racer. We'd rather be kicked in the shins for eight hours than play this again.