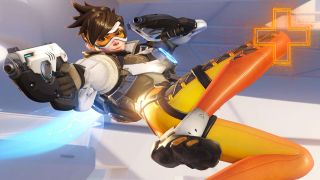 We're celebrating the end of an incredible decade for games, movies, and TV shows. Overwatch is one of the games that defined the last 10 years of play, placing 24th in our 100 best games of the decade rankings. Read on to find out why...

Creating a competitive FPS with characters you're compelled to care about ain't easy, and doing so without any campaign mode is damn near impossible. But Overwatch does just that, spinning a vibrant lore that exists outside of a playable campaign that draws you into the wild world of future Earth, with a cast of characters that equal parts delight and frustrate you.

Couple that with gameplay styles that vary drastically between the heroes, and you've got a game that manages to successfully fold in believable, well-written lore into a tightly wound, blemish-free first-person shooter that continues to improve with (almost) every new update.

The heroes we deserve

The Overwatch League is one of the most popular esports leagues ever, drawing in millions of viewers and doling out over a million dollars for its Grand Finals champions. When the OWL is on, no one's debating the value of Reaper's decision to fake his own death and come back as a masked vigilante, they're just hoping the New York Excelsior will beat the LA Valiant.

That Overwatch is a game built to thrive in a burgeoning esports world is clear, but the existence of a deep, interesting lore makes it a stand out title in that world. For many casual and competitive Overwatch players, the lore exists, and it matters.

I started playing Overwatch nearly a year after it debuted, thanks to a stint of living abroad. Initially, I jumped into the game after watching only the opening cinematic, and was drawn to McCree because his mechanics felt somewhat similar to Halo's Team SWAT game type. But Overwatch's gameplay is peppered with hints and nods to the deeper story, and the more rounds I played the more I grew morbidly curious about these character's dynamics and the reasoning behind them.

I wanted to choose a character who I understood more, or at least know about the one I was currently maining. Why is Pharah so angry at her mother? What's the deal with Reaper being super aggressive towards Mercy and Winston? And just how does Torbjörn keep that beard looking so voluminous?

And so, as was inevitable, I found myself falling down a black hole of Overwatch shorts and comics, learning about the tragedy of brothers Genji and Hanzo, openly sobbing while Mei was trapped alone in an Antarctic research facility, laughing my ass off at Reinhardt's playful jabs at Torbjorn. I found myself hating the newest character, Moira, but loving the way she played in-game, causing me to apologize on behalf of her before every competitive game, not wanting people to think my hero choice was an endorsement.

I hated enemy Widowmakers and judged when my teammates chose her, but after a slightly-drunk Google session prompted by my partner asking why she was "all blue," I learned that her story is the most tragic of them all.

All of these characters play as distinctly as they are, with no two feeling even remotely the same. Chipper, cheery Tracer is lightning fast, dropping quips as she escapes a room faster than your eyes can register. Reinhardt's boisterous personality its mirrored in the way he plays: he swings his hammer wildly to disperse a crowd, or charges in with a bellow, his physical figure as imposing as his booming voice.

Then there's the game's virtually unparalleled diversity. You'd be hard pressed to find a mainstream game (let alone one with a vast esports community) with a cast as wildly diverse as Overwatch's - there are members of the LGBTQ+ community (Tracer and Soldier 76), an Indian woman with autism (Symmetra), a Mexican hacker (Sombra), a Korean gamer turned war hero (D.Va), and more that stray from the prototypical video game protagonists.

Yes, lately that diversity has waned, prompting fans to ask why there still isn't a playable black woman, while there's currently a playable hamster. But it's that exact line of questioning that makes Overwach something special - we expect more from a game that has consistently given us diverse, fleshed-out characters from marginalized groups. We've gotten a taste of what it's like when a great game give us great, diverse stories, and we want more. If that doesn't attest to Overwatch's importance within this last decade, I don't know what will.