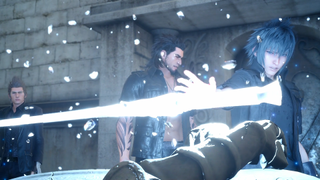 After making a big deal over Final Fantasy 15's September 30 release date at March's Uncovered event, Square Enix has made the difficult decision to push the release date of the long-awaited entry in its flagship RPG franchise to November 29. According to an interview with game director Hajime Tabata in Japanese gaming magazine Famitsu (as translated by Kotaku), it's because there's still quite a bit of bug-squashing left to do.

Tabata had already explained some of the reason for the delay in a lengthy video before Gamescom - namely that the team is currently working on a 'day one' patch and would rather include the patch on the disc - but this interview sheds some light on exactly what needs work.

“There are still of number of bugs like characters floating unnaturally in the air or appearing all strange,” Tabata told Famitsu. These are the sorts of bugs that plague many open world games (I remember playing Dragon Age Inquisition at launch and watching my party stop what they were doing to climb invisible ladders to nowhere), and while they may not game-breaking, Tabata wants to ensure that these sorts of things don't pop up at launch. That's in addition to frame rate bugs and other optimization issues that currently need work within Final Fantasy 15. These issues - as well as additional refinement of "game balance" - should be covered by the day one patch.

Where Tabata wants the additional time though, is in taking that patch and actually putting it on the retail disc. He cited a statistic that over 20 percent of Japanese gamers don't have the ability to access the internet to patch their game for whatever reason, and wants all players to be able to experience the best version of Final Fantasy 15 without having to count on a download.

It's an admirable request, and one that's worth taking the time to make sure it's done right, especially considering the pressure on Final Fantasy 15 to revitalize the brand on a global scale.