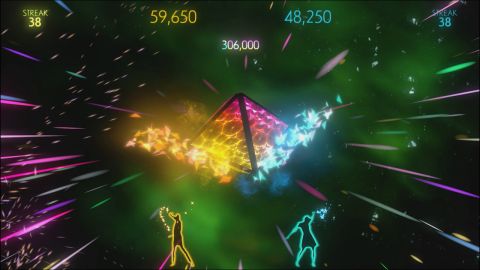 Inon Zur's classical remix of Bohemian Rhapsody may be one of the most beautiful pieces of music I've ever heard. That's a revelation for me, because I had no idea this piece even existed before playing Fantasia: Music Evolved, the Kinect-controlled lovechild of Disney Interactive and Dance Central. But going on this whimsical and musical jaunt through an updated Fantasia world has shown me some wonderful things. While Music Evolved doesn't reach the splendor of the films that inspired it, it brings something fresh and inventive to the rhythm genre, with that hint of corny Disney charm that'll have you smiling despite yourself.

Inspired by 1930s production notes for the original Fantasia, Music Evolved is billed as a direct sequel to the Fantasia films rather than a rehash or a tie-in. The player becomes an apprentice to Sorcerer Yen Sid, who you probably remember from Fantasia’s famous Sorcerer’s Apprentice sequence… or Kingdom Hearts. There are two kinds of people in the world. Teaming up with another apprentice named Scout, you go on a saccharine adventure to rid the world of a music-drowning force called the Noise. That’s about as deep as the plot gets, and Music Evolved certainly won’t be drawing players on the merit of its story, which can be completed in about five hours. Still, the idea of a rhythm game with even a semblance of a plot is novel, so points for originality at least.

The journey to defeat the Noise leads you to a series of ten realms, each with its own theme and musical secrets to uncover. These worlds certainly have their charms, with anthropomorphized foodstuffs starting up a band in The Neighborhood and a stone cottage in the Hollows turning out to be a half-house half-chicken with an affinity for punk rock. However, few feel as dynamic as one would expect from a Fantasia title. Compared to film sequences like Night on Bald Mountain and Firebird that are so memorable most can still recall them a decade or seven later, the worlds here feel gimmicky. They're meant to grab your attention with silliness and whimsy, which they do, but ultimately lack any depth or emotional oomph. There are some standout moments and images--a majestic lion-stag with bells in its antlers comes to mind--and the visuals do look nice overall. However, there wasn't much I'd call awe-inspiring, which is a shame given the game’s impressive pedigree.

However, the real draw here is the rhythm gameplay, which does some interesting and genuinely innovative things. Music Evolved has the basics on lockdown: players match on-screen movement prompts set to music, and get points for every move they get right. But in contrast to the current landscape of dance games, Music Evolved doesn’t demand players execute a series of hyper-specific moves. Instead, it presents a simplified set of commands that tell players to swipe, push, or drag at the right moment, and lets them decide the rest. This setup allows for surprising freedom of motion, letting players fall into a natural rhythm where movements feel effortless. This might confuse players accustomed to precise instructions common in the rhythm genre, but it doesn't take long to get use to the flowy technique Music Evolved encourages. Now you don't have to worry as much about getting the moves right, so you can relax and enjoy the game more. Multiplayer is the same story, with each player executing a portion of the moves with a few made available for both, giving a good sense of cooperation while letting both players execute moves as they see fit.

Outside the dance screen, the interface also benefits from tight controls that don’t go nuts when you hold up two palms at once. While they are tricky to use in some places (I had recurring trouble with the remix feature, where I could never quite tell if the game would select the option I was swiping toward), they are largely reliable, working out one of the dance genre’s most persistent frustrations. In addition, slight differences from the typical screen setup (not limiting side-to-side movement to a small window, putting the player’s image at the bottom of the screen where it’s visible but not distracting) enhance the experience in small but noticeable ways.

Play for fun, or play for keeps?

Not interested in story mode? Music Evolved offers a full, plot-free song library, which can be unlocked immediately by activating Party Mode in the options menu. This way you can play through every song available with no strings attached. But if you want an extra challenge, each song you unlock in story mode comes with an optional task attached to it (i.e. "hit this many arrows", or "do this specific sequence perfectly") that can be accessed by leaving Party Mode off. It's up to you whether you just want to play for fun, or to show off your rhythmic skills.

Where Music Evolved really shines though is in its creative use of music, allowing players to mix song renditions together and actively change the sound with their own compositions. Each song in the library has two remixes in addition to the original version. Players are encouraged to switch between them several times per session, so while I didn't memorize any given track, I also didn't get bored with their familiarity. If you’re not a fan of modern pop or alternative you’re probably going to wrinkle your nose at the song list, since the likes of fun., Lady Gaga, and Lorde act as its pillars. However, the list is fairly robust overall, with the works of Bach and Tchaikovsky lined up right alongside modern classics like Rocket Man and Ziggy Stardust.

Even more inventive than the remixes is the creation feature. Through a series of simple mini-games, you're given the tools to create a new beat for the song you're playing by either carefully assigning notes or frantically flailing your arms around. This makes the feature equally workable for your seven-year-old sister or a resurrected Chopin, with designs in place to make even the former sound good. Contributing to the music as opposed to just reacting to what's on screen, and hearing your own "work" added to the mix, makes the experience that much more enjoyable. This is where Music Evolved really lives up to the Fantasia name: in an age when music is readily accessible and heavily consumed, Music Evolved still manages to feel unique in how it exposes players to it.

Music Evolved won't keep you enthralled forever. The story mode is little more than window dressing, and even though the song list is extensive (with an imminent set of downloadable tunes on the way), it's still a rhythm game that's engaging in, at best, short bursts. However, you probably will remember that hard rock version of Vivaldi, or that awesome beat you came up with for Feel Good Inc., and decide to have another go at it. And yes, you can pretend to be a wizard. Go on. You know you want to.