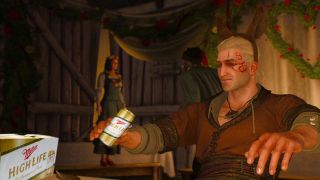 The best way to play The Witcher 3: Wild Hunt is with an absolutely plastered Geralt of Rivia, and it's even better if you're also several sheets to the wind. I came to this conclusion during a late-night sudsy sesh when I suddenly realized that I was in perfect simpatico with the White Wolf as he hacked a Foglet's arm off with ease on a screen that was worryingly blurry. It was then, as my tin balanced precariously in my lap, that I realized that Drunk Geralt was OP.

I'm not condoning irresponsible alcohol use, nor am I suggesting that this is in any way a demonstrably good idea. But by the will of some strange planetary alliance, some rolling tide of fermented grain, I discovered the joy (and pain) of The Witcher 3 when both Geralt and his handler are hammered.

The ambience was just right

Now, I hadn't meant to get tipsy, but I'm painfully short and generally a lightweight, and Miller High-Life tastes like water. I did, however, mean to get Geralt drunk. That's because my lazy ass had run out of potions and non-alcoholic refreshments, and right before this moment I had prompted Geralt to eat his last handful of berries.

You see, I was walking into a crucial point in the game, one from which I couldn't turn away. Midway through Act 2, you've followed all your leads regarding Ciri and they've led you to The Isle of Mists somewhere in Skellige. As you sail out there, you reach a point where a pop-up appears, warning you to save your game. Beyond this point, the open-world closes temporarily as you follow the story linearly, so you should head there fully stocked up on potions, repair kits, and the like.

As I mentioned earlier, I was drunk, so I did not do this. Instead, I sailed Geralt into the misty land, docked his boat, and started getting attacked by some Foglets. This was all fine and dandy for a while, as I dispatched them with ease, but I soon realized this playstyle was untenable. I was playing recklessly, wasting my stamina on rolling instead of casting Signs, and Geralt was taking quite the beating. But I made it (barely), found Ciri, and... headed straight to Kaer Mohern to fight the Wild Hunt with nothing in my inventory but Redanian Lager and Kaedwenian Stout.

The Battle of Kaer Mohern is a fight sequence that's fairly drawn out - with cutscenes and all it's about 30 minutes, according to a YouTube video from TheAngrySithLord. During this sequence, Geralt has to dodge giant fireballs, close portals with dimeritium bombs, and fight Wild Hunt Warriors who are all at a fairly substantial difficulty level. I initially thought entering into this bit with no potions to chug or food to nibble or water to sip would be ludicrous, but in the face of foolishness, I decided to be the bigger fool.

As soon as the fighting began I equipped every consumable alcohol I had in my inventory into all of the quick slots, which amounted to about 15 pints of lager and some of the harder stuff like erveluce. At this point, in the real world, I had about three beers on an empty stomach, so I decided to make sure Geralt was on my level - the first thing I did was make him knock back three lagers before unsheathing his sword.

The entire screen instantly became blurry as if I had turned on a bokeh effect (save for the HUD, which remained jarringly clear). There was the subtle hint of a doubling, as well - the edge of Geralt's blade looked slightly pronged and sometimes it seemed as if he had three feet. The center of the screen was always the clearest, but anything that extended past Geralt's broad shoulders looked like an Expressionist painting.

"Everything is blurry but my health is so high!" I yelled, sending my cat careening out into the hallway. Geralt's movement seemed unaffected, but his health skyrocketed after every drink, so I began putting away hooch after I took even the slightest bit of damage. The two of us were quite the pair: my boozed-up reflexes weren't fantastic, but enemies could barely make a dent in Geralt's health, so I was playing incredibly aggressive, jumping into the fray and whacking away at whatever was in front of me (thank god there's no friendly fire, or I would have sliced Triss' head clear off).

I even fought the big bad Imlerith while me and ol' Gerry were toasted - a battle that many people would suggest we have our wits about us for. But Drunk Geralt was untouchable, like the town's alcoholic that cops can't wrestle into handcuffs. As I stood over Imlerith's corpse and looted the shit out of it, I wondered if Perpetually Drunk Geralt was the only way to forge onward with The Witcher 3.

Drunk Geralt has his limits, and so do I

But then I tried to ride Roach. I didn't care if I would get an HWI (horsing while intoxicated), I just wanted to quickly travel a few hundred yards without getting into scuffles with level five wolves. Alas, the gods had something else in mind for me, as I mounted Roach, took a few dozen steps forward and... fell off a ledge into a ditch. My partner, who was watching me struggle to steer my trusty mare, had to ask if I was okay after the fourth time I veered off the path and got stuck in some bramble.

"I- I don't like this," I mumbled, before pulling over to meditate on my life choices while Geralt meditated his way to sobriety. You see, much like in real life, being drunk in The Witcher 3 is only fun for so long. Eventually, you start to alienate people, get lost somewhere you shouldn't get lost, and disrespect the powerful majesty that is your pet horse. Drunk Geralt was laborious and irritating whenever he wasn't in combat, and Drunk Alyssa was pretty much the same way.

As the action died down and I got back to the free-roaming bits that I usually relish, drunk me grew bored and huffy. I skipped through cutscenes, ignored unexplored areas, and plowed through places looking for something to hack at. I was spoiling everything that makes The Witcher 3 magical, and being a complete bitch. I soon decided to save the game, go to bed, and pick back up again tomorrow.

Unfortunately, Geralt can't get a hangover, but I sure can. And I did. Safe to say it'll be a while before I get blind drunk and toss a coin to my witcher again.