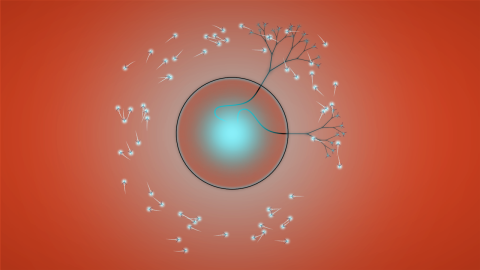 Imagine a game where you plant trees that grow on asteroids, produce seedlings that fly, and send these to new asteroids to grow new trees. What makes the resulting RTS so smart, beautiful and compelling is the neatness with which this astroscience fantasy is presented. Clear, logical relationships and a look halfway between Japanese inkbrush art and scientific insemination diagrams.

You soon run into enemy seedlings. If you outnumber or outgun them, you can swarm their rock, zap them out of the air, destroy one of their trees and burrow down its roots to the core of the asteroid. Get enough seedlings to the core and the whole thing, including any trees left standing, is yours. That gives you more trees to generate more seedlings and spread to more rocks.

The dry logistics don’t hint at how rewarding this is to see. Seedlings swirl around planetoids in streams of hundreds, tree-branches shudder under laser fire, and the blossoms they sprout have to snap off before you realise they were upside-down seedlings all along.

Different asteroids produce seedlings with different levels of health, power and speed, making some profoundly worth fighting over. We’ve slaughtered hundreds of our puny seedlings trying to take a Strength-heavy planetoid from its obscenely powerful guardians – which now that we write it down makes us seem slightly dim.

As your differently-specced seedlings get mixed together in an assault, Eufloria has a great way of representing their stats. How podgy they are represents how much health they have, the length of their laser-nose is a measure of their power, and their wingspan is proportional to how fast they can go. It’s about the neatest game symbolism we’ve seen.

A prototype game, Dyson, is still free, but lacks the most interesting elements and controls, such as letting you order only your strongest seedlings to battle. Eufloria could still do with more of these: you ought to be able to target specific trees and tell asteroids where to send all future seedlings.

A final mechanic involves planting flowers that bloom into galactic deathlasers, but Eufloria is achingly slow to introduce these. It’s achingly slow throughout: matches can take more than 40 minutes, and it’s not until halfway through that you get to massacre things with murderblooms and the AI gets aggressive enough to require constant action on your part. When it does, though, Eufloria is a tough, intelligent and genuinely exciting strategy game.