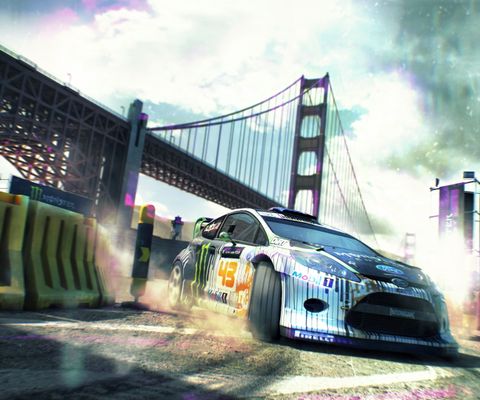 If DiRT 3 is an off-road game for the hardcore racing fan, DiRT Showdown is for everyone else. Automatic gears, forgiving handling and demolition derby races on lethal-looking figure-8 tracks make this a distinctly arcade-styled spinoff entry in the series. There's undoubtedly a gap in the market for a cutting-edge arcade racer, but if that gap is round, this game is a little hexagonal. It still fits, just with a slightly cross-threaded feeling.

The presentation style is much more similar to the sunshine-filled DiRT 2 than last year's DiRT 3, complete with that festival air that seems to make your telly smell of freshly-cooked hotdogs mixed with burnt rubber. That said, the game undeniably feels more compact than previous DiRT games, with no faffing about between front menu and startline, offering you a smorgasbord of race and combat events from which to choose from.

Wait – did we say 'combat' events? Sure did. There's actually not that much racing going on here, at least not if you play through everything in the order provided in the main career mode. Much less of the game is based on track events like races, or the returning Domination events which see you trying to top the split times on four sections of track during a three lap dash.

That's the brilliant Alan Partridge reference in the Achievement for triggering the replay mode, and it's in there with good reason. The bulk of the game is all about vehicular carnage, which is highly reminiscent of PSone classic Destruction Derby, right down to the announcer shouting 'fender bender', which is surely a nod to Reflections' vintage racer. Some events are straight arena deathmatches, requiring you to score points with aggressive moves like barges, T-bones and 360 spins, without wrecking your own vehicle.

Others like Hard Target see you trying to survive in a closed arena with more and more cars added to the fray, all hell-bent on destroying you. That one works particularly well as you fight to postpone the inevitable.

Above: Hiding behind those pillars works sometimes. Not this time

Also new is the Sumo-style event which sees you trying to push rivals off an elevated platform. There's no denying the compulsive 'restart til I win' gameplay, but with the constant stream of inane DudeBro dialogue from the announcer (who can only ever be turned down to 50% volume, unlike the completely mutable music), this game type can feel oddly throwaway – something I would never have said of any of the content in DiRT 2.

Then there are the 'Hooniganism' show-off 'Trick Rush' events, which don't really seem to fit the ethos of either branch of the series, being too showy for the serious rallying of DiRT 3, yet too finesse-heavy for the arcade crowd who just want to hold accelerate and look at pretty crashes. They probably make the most sense here, especially with the simplification of the handling across the game which means performing donuts and drifts in tight spaces is much easier than it was in DiRT 3.

Above: Trick Rush is a bit like Stuntman, giving you a set route to complete

Trick Rush also makes a lot of sense online. Starting at the same time as your online friends and seeing ghost images of their cars just ahead of you as everyone tries to complete the trick course as quickly as possible is superbly competitive. And that's true of the whole online aspect in general. Multiplayer races are solid and smooth, while dashes to pass through every checkpoint using the route of your choice in Speed Skirmish is gleeful stuff – especially when your route turns out to be fastest.