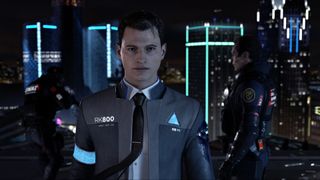 Detroit: Become Human is out now. And my goodness, we need to talk about Detroit’s endings, because they are emotional, varied, and incredibly climactic. Whatever path you forged through the game’s story… you’re likely to have an ending that felt fitting for the way you played. Some Detroit: Become Human endings are uplifting and feel like winning, while others very much feel like you’ve failed, and they’re incredibly downbeat. What follows in the below video is a discussion of the endings and big talking points that we have after finishing the entirety of the game. It features Andy Hartup, who handled the review, and Jess Kinghorn from our sister publication Official PlayStation Magazine. Obviously, there are FULL SPOILERS for the entire game in the video and in the text beneath it.

It’s very possible to die during the second half of Detroit. For keeps. While Connor continues to be replaced each time he is killed, Kara and Markus have no such luxury, so once Markus crawls out of that pit, and once Kara flees Todd’s house with Alice… they can and will die if you make the wrong decisions. We discuss this idea of death in the video.

The endings you get very much depend on how you play the game, and whether you fail or complete certain tasks along the way. Jess and myself had very different conclusions to Kara’s story, for example, based on a scenario that happens quite near the end. It’s very possible, however, that you can die well before the conclusion. Equally, we had very similar ends to Markus’ story.

And then there’s Alice. We won’t spoil it here, but the way you interact with her will change things significantly, and once you reach the end of the game, the way you’ve chosen to treat and respond to her will definitely influence how you feel about a second playthrough. And you really, really need to do a second playthrough to experience all Detroit: Become Human’s endings. In fact, you may need to journey through the story 3-4 times before you’ve seen the majority of it.

And don’t forget to check out the Detroit: Become Human secret ending post-credits, which gives a neat little flourish to Detroit’s overall presentation and meta-game. We’ve included our video for that below, because we may as well go weapons-free at this point.

Finished Detroit: Become Human? Let us know how you ended it in the comments below.