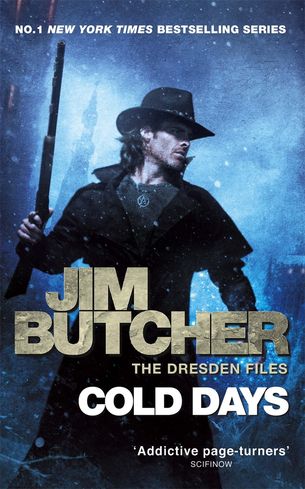 Keeping a well-loved character going for a whole series of novels is a tricky matter: authors never give up when a series is at its peak, and a sorry few continue to pimp out their protagonist long after most readers have lost interest. Cold Days could potentially represent the tipping point for The Dresden Files , the start of the decline.

Harry Dresden always had to develop as a character. For a dozen books he’d had the same apartment and the same job. Now he’s been through some life-changing experiences, and works for the fairy Queen Mab, who gives him a virtually impossible assassination for his first assignment. He’s getting further out of touch with the real world, and has become even more powerful – a combination that makes him much more remote as a hero. You can’t fear for this new Harry. And a more powerful hero requires more powerful enemies, which is generally the first step along the path to ridiculousness in a series.

There’s also far too much exposition. When a series runs to as many volumes as The Dresden Files , it’s foolish to try to recap many major events. Readers familiar with the series will remember what happened, while readers new to it only need reminding if it’s crucial to the current narrative. Otherwise it’s just an unwanted distraction.

As an urban fantasy novel, Cold Days is average, but The Dresden Files are usually better than that, which makes this something of a disappointment.