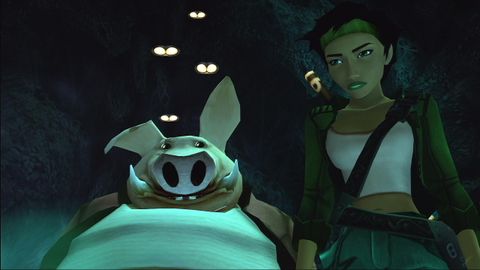 Back in the archaic days of 2003, Michel Ancel%26rsquo;s Beyond Good %26amp; Evil experienced a veritable avalanche of rave reviews. The game managed to mix hovercraft racing, stealth, hand-to-hand combat, platforming, photography, mountain biking, underwater basket weaving, wine tasting and umpteen other gameplay mechanics together without becoming an absurd incongruous mess. Even crazier, it featured a female protagonist who didn%26rsquo;t dress like an S%26amp;M fetishist. Too bad it was a complete financial flop.

With nearly a decade gone by, Ubisoft has brought this underappreciated classic back from the grave with an HD upgrade and remastered soundtrack. Are these superficial improvements enough to entice the modern gamer into giving Beyond Good %26amp; Evil a second chance? The answer is yes%26hellip;well, sort of. While eight years of gaming innovation have made the wrinkles all the more apparent, this game has actually aged fairly well.

You take on the role of Jade %26ndash; a human freelance photographer who lives on the alien planet of Hillys. Jade spends her free time rescuing orphaned children from the Domz. The Domz are a violent alien race and the game begins with them invading Hillys. The only thing that%26rsquo;s keeping Hillys from becoming completely overrun are the Alpha Sections %26ndash; a group of elite space soldiers tasked with protecting the galaxy from the Domz threat. However, Jade isn%26rsquo;t so sure if things are really that cut and dried, so she embarks on a quest to uncover the truth with her adoptive uncle %26ndash; Pey%26rsquo;j.

First things first: Beyond Good %26amp; Evil looks incredibly beautiful in high definition. From the shimmering water to Jade%26rsquo;s ridiculous green lipstick, everything pops out in a colorful dynamic way. The remastered soundtrack is also an absolute treat with everything from the reggae to the soft piano medleys helping to create the illusion of a living breathing world.

The story is well written and competent; however, newer gamers who pick up the title will most definitely notice that this isn%26rsquo;t the brilliant sci-fi epic everyone%26rsquo;s been talking about. Rocking a name like Beyond Good %26amp; Evil, you would expect the game to be filled with mystery and suspense where you can never be sure of anyone you meet, but that simply isn%26rsquo;t the case. Characters are either patently good or unashamedly baby-stomping evil, certain emotional sequences come across as rather sterile, and the voice acting really can%26rsquo;t hold a candle to the modern generation games.

On the plus side, the world of Hillys is still (surprisingly) quite engaging with a menagerie of unique alien inhabitants and a fairly large world that begs to be explored. Exploration is actually the greatest strength of Beyond Good %26amp; Evil HD. Whether you%26rsquo;re investigating new areas to photograph alien wildlife for the Science Center or hunting for pearls to sell on the Black Market, the game never feels like it%26rsquo;s stalling for time.

Combat and level design are two other aspects of Beyond Good %26amp; Evil that show the game%26rsquo;s age. The entire game world is split up into numerous small environments that are separated by loading screens, but the load times are thankfully short. Combat is also very simple and only requires the use of one button (two, if you have a companion running with you); however, this game is by no means a button-masher. Encounters with major enemies and end-level bosses require a surprising amount of strategic thought to be overcome. Likewise, the variation in stealth sections, puzzles, high-speed chases, minigames and shooter sequences make for a game with incredible pacing that grabs hold of your attention and refuses to let go.

If we could put it in one sentence, Beyond Good %26amp; Evil HD is a game that has aged reasonably well. While there are a few hiccups here and there, the visual update is fantastic and the gameplay is still incredibly well paced and fun. The uninitiated may not understand what all of the fuss is about; however, if you%26rsquo;re a fan of the original, Beyond Good %26amp; Evil HD is guaranteed to bring on the nostalgia.