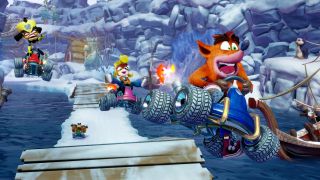 Crash Bandicoot's kart racing remake could be getting a ton of new racers as part of Beenox's post-launch support plan for the game. Baby Crash, Spyro, Emperor Velo, Gnasty Gnorc, and many others were all found in a recent datamine of Crash Team Racing Nitro-Fueled.

A list of characters, including names from Crash Bandicoot games and Spyro the Dragon series, was featured in a thread posted on Resetera, it includes all the following characters:

Beenox had already confirmed that Spyro would be coming down the road, but this list has far more names than previously mentioned. We don't know if we'll see all these faces in Crash Team Racing Nitro-Fueled as some of them could be in the games files for other reasons. Some could have even been cut altogether. I can't wait to dominate the track as Spyro, though.

These characters look to be a part of Beenox's upcoming in-game events, one of which is already live: the Nitro Tour Grand Prix. It's the first of several seasons, Nitro Tour includes a new map, Twilight Tour, and a new playable character, Tawna Bandicoot. You can see a full breakdown of the downloadable content coming to Crash Team Racing Nitro-Fueled over at the PlayStation Blog.

Looking for some Crash Team Racing tips? Check out 14 ways to be the best at Nitro Fueled.