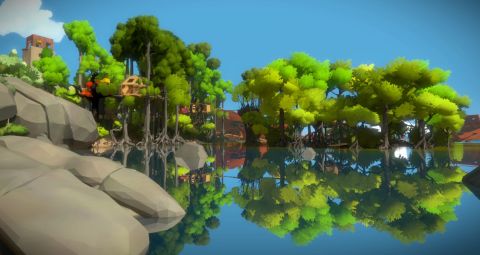 As brilliant as it is infuriating, The Witness' ingenious puzzles all too easily have their shine worn away by length and a constantly extending complexity.

Before we go anywhere with The Witness, I just want you to know what you’re getting into. This is a puzzle game built from one puzzle. Okay, there are variations, which I’ll get to later but, yeah, basically it’s mazes - line drawing, finger mazes. All of it. Some of it is very clever and there are moments where I felt like Sherlock for solving something, but unless doing this for 20-30 hours (at least) gets you hot in personal places, you might want to think carefully about getting involved. There are moments of great beauty and ingenuity, but unfortunately the balance tips far more in the direction of maddening infuriation and lengthy frustration.

Let me show you my wall of madness:

Seriously, that’s a thing that happened. Between reversing reflections, remembering shapes and other transposing, altering solutions The Witness is prime Crazy man note taking material. The set that leads to this sees you emerging from a tunnel onto a first person island world covered in these maze panels... aaand good luck to you. It is savagely uncaring to your progress. ‘Press R2 to run’ is the beginning and end of your tutelage, and after that you’re left poking screens and trying to piece together the rules of the world.

The overall structure sees the island split into sections, each with a theme and a unique puzzle variant. There’s a temple, a town, forests, a marsh like area (that I was convinced was a sewage treatment plant) and so on. Within each of these there’s one master puzzle - a lengthy collection of mazes that ultimately lead to activating a large yellow crate. Get to that and it’ll slowly extend a strange laser/light armature that shines a beam to the top of a mountain. Atop that mountain is a box with seven latches, each unfastened by a different beam. The opening of that is your ultimate goal.

Eight years in development The Witness is Jonathan Blow's follow up to Braid. That time manipulating-platformer was a huge critical success and partly opened the way for an indie gold rush that followed in its wake. The game's lengthy development has seen Blow hone and shape the experience over time. That's seen many changes along the way, such as a move from a direct narrative originally told via audio logs to the final, more obscure quotes used in the finished version. He's also made it clear this a game more about the experience than the reward.

What guidance there is generally involves simplified versions of a theme’s maze - a two square starter to explain that you might have to draw around certain blocks, separate colours and so on. Once you’ve progressed past this initial tutorial the difficulty increases with larger mazes, more demanding variations and distracting rule tweaks dropped in whenever it feels like you’re getting somewhere.

My relationship with The Witness has been difficult. I really want to like it - the idea, the world... every part of it appeals to my interest in quirky, arty little indie curios. But. There are parts of the game that almost feel like they’ve been designed as a punishment, and when you have so little idea what’s going on at the start, it can feel sparsely cruel.

So much of it is a mystery with layers that will only reveal themselves hours, days or weeks later. That should be great but there’s such an unloving feel and lack of feedback that it struggles to feel rewarding. Like showing an A+ report card to a parent who just frowns wordlessly.

I found myself thinking of Dark Souls a lot while playing, bizarrely. Both are uncompromisingly tough games that exchange hard work for progress with zero hand-holding. However Dark Souls feels like a warm hug from a friend compared to The Witness’ clinical sterility. Where Souls teases you through the world, and draws you on with tiny sparks of understanding, The Witness is practically binary: you’re either getting somewhere or you’re not, and it doesn’t really care which.

You do learn and unravel the world as you progress - everything and anything can be a clue - but you can just as easily be left barking up all manner of wrong trees. I accidentally ‘solved’ one puzzle using its shadow on the floor and some leaves. Completely wrong. I spent ages trying to work out why I couldn’t get my ‘solution’ to progress, assuming I wasn’t getting one of the game’s many sleight of hand rule changes. Eventually I found out, by comparing with someone else’s game, that the real solution wasn’t even available to me yet.

There is fun here, it just feels like everything goes on just that bit too long, or adds one too many layers. What starts as an engaging and tactile challenge so easily overstays its welcome. I found myself constantly thinking that if a certain puzzle ended here, or hadn’t thrown in another variation there it would have been great. There are moments of brilliant dawning realisation leading to a solution that feel amazing. But all too often these are brief, flaring lights in a wearying procession of more mazes. They are both the only thing you do and the only reward for doing it. I’ve been asked not to spoil the puzzles which makes it hard to really explain why, but I can say that in most cases my main emotion to getting through to the end of any given section was ‘thank Christ that’s over’.

Even so, completing one puzzle involving colours is one of my gaming highlights of the year so far. Solving it was a profoundly satisfying experience and I loved it. But elsewhere the game can feel almost snide or deliberately laborious. Some 25-30 hours into The Witness I started to settle more into the mindset of its design and warm to its sociopathic charms. Even then my desire to beat it was more motivated by not wanting to let it win rather than anything else.

The world is at least beautiful; a colourfully stylised location that’s fascinating to explore, but it’s also dreadfully pretentious. There are scattered audio clips and videos from philosophers and scientists, vaguely going on about life and journeys, with all the skill of song lyrics scrawled on a teenager’s notebook. I can see a lot of people going along with it all for fear of being the one that doesn’t ‘get’ it. It’s the emperor’s new game.

There are fleeting moments of fantastic achievement as you work through this world and it’s definitely a fascinating experience. It’s also obtuse and protracted, running interesting ideas into the ground until they feel like work and grinding your time through a mill while giving little back. With more judicious editing in each area’s design this could have been a slightly smaller but infinitely more enjoyable challenge. But, as it stands, the demands made, and the returns given, stretch out the reward to the point of transparency.

As brilliant as it is infuriating, The Witness' ingenious puzzles all too easily have their shine worn away by length and a constantly extending complexity.