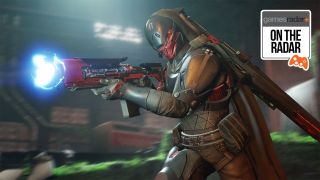 It's not even out yet, but I reckon you already have an idea of how you suspect the launch of BioWare’s Anthem game is going to go. After all; this isn’t our first rodeo, is it? We've been here before. The servers will struggle. Complaints will begin to bubble up on social media. Players will report a lack of meaningful endgame content, or perhaps share their dissatisfaction at repetitive daily challenges. And then, eventually – after numerous fixes and patches and perhaps an expansion or two – Anthem will become the game everyone had hoped for at the beginning… except it'll be too late by then. Naturally.

ON THE RADAR: ANTHEM

Be sure to check out our GamesRadar's On The Radar: Anthem hub to find all of our in-depth and exclusive coverage of BioWare's latest.

I'm not saying this will happen, of course; I'm just saying this is what we've all seen before. It's the template that's been set thus far. It's what experience has taught us. Thanks to games like Destiny and The Division, we've learned the hard way that games as a service (GaaS) tend to have a rocky debut… so forgive us if we temper our Anthem-flavoured expectations a little. Everything Bungie learned from the missteps of the inaugural Destiny didn't translate entirely to its highly-anticipated sequel; whereas with The Division, Massive Entertainment and Ubisoft Reflections simply took too long to course-correct the issues that plagued its own shared-world shooter experience. But if Bungie didn't learn from its own mistakes, can any other studio expect to do so? What then can BioWare take away from Destiny and The Division's bungled launches?

The key to most of the issues, I propose, lies in simplicity; either too much of it or too little. Take looting and loadouts, for starters. Destiny remained accessible despite its overcomplicated story and systems because no-one delivers meaty, satisfying gunplay quite like Bungie, and – to a greater or lesser extent – we've come to accept that MMOs are traditionally over-egged in the lore and loot stakes. The Division, however, fared less well; its complex loadout options and nebulous story gave players little to hold on to once they'd completed the campaign. Of course, there's a little more to it than this – a player base rarely falls away because of one isolated mistake – but it begs the question nonetheless; if The Division's dizzying RPG stats and loadouts hadn't have been so complicated, could it have better retained those early adopters?

The same goes for the story and it's here, interestingly, that Destiny and The Division lie at either end of this spectrum. Even now, several hundred in-game hours later, I'm still not really sure what Destiny is about. I ascertained the major story beats – I think? – but while subsequent expansions tried to pack flesh onto the skeletal foundations set up by Destiny's vanilla release, it was too little too late. Players shouldn't have to wade through Grimoire cards on a website to ascertain who's done what and why. A story should unfold organically with gameplay, in a way that feels authentic to the player. DLC and expansions should only serve to expand on a story, not prop it up, and choosing to deliver much of this essential exposition via loading screens – a time where, let's face it, many of us are engaging in party chat, or going to the bathroom, or just scrolling absently through Instagram – was a misfire.

Be sure to watch the video above for GamesRardar's hands-on impressions of Anthem.

But while Bungie's story suffered at the hands of over complexity, The Division was too light touch, unfathomably so given the many other post-apocalyptic shooters all muscling for space at the same table. I understood how to play, and what to do, but beyond the polished cinematic trailers and occasional cut-scene, it was never clear why we were tasked to do so. Worst still, it's incredibly difficult to become invested in a supporting cast if I know, or care, so little about my own character's role in this world, too.

Some of us are still not quite sure why there's a character level and a power level in Destiny, either. We also don't really understand why Bungie rebadged the 'light' level as 'power' later on, as though, somehow, that rebranding would inexplicably make it easier to understand. It's another unnecessary complication, one that not only disadvantages players new to the game but also those returning to it, too. Reacclimatising to a game's reward and progression system – not to mention mods, god rolls, infusion, and the rest of it – is hard enough, and when that game's changed so drastically in a matter of months that nothing is as it once was, it can be impossibly so. Tweaks, revisions, and changes need to aid the player, not confuse them. Substantive changes – such as reducing Destiny's Crucible's team-count down from six players to four in order to stabilise servers – may seem dandy-o on face value, but to some, it's disrupting an entire clan's dynamics.

It’s all about the endgame

But the most egregious mistake made by both Destiny and The Division is an astonishing lack of endgame content. In Destiny, there was little to spend our glimmer or motes of light on, whereas in The Division, it was possible for even casual players to platinum the entire game within just a few weeks. Incredibly, Destiny 2 doesn't even let players sequentially replay the story missions, either, removing any opportunity for players to willingly explore beyond the hidden paths, and/or better understand the story. It's as though the team has intentionally revoked all ways a player might generate replay value.

Teamwork needs to be rewarded, but not at the expense of the solo players. Exploration, too, should be encouraged by hidden loot and secrets, and weekly challenges and missions – such as Destiny's Nightfall strikes – should never be a perk only afforded to those who've stumped up for expansions and DLC. Shoot 'n' looters only work when the shooting feels meaty and balanced and the looting gives adequate rewards, and for that to work effectively, you need content that feels meaningful and sustained. We accept RNG odds (even if it's easy to become disenfranchised by it – Cryptarch, I'm looking at you). We're not against a little grinding or rinse 'n' repeat challenges, either, but to tempt us back into recycling missions and well-trodden environments, there needs to be a suitable pay-off… and another fecking Edge Transit simply isn't it.

BioWare has kept the story and endgame elements of Anthem a closely guarded secret thus far. While GamesRadar has had the opportunity to run a deep dive on the former and get hands-on with the latter, there are still a lot of unanswered questions. Ultimately, BioWare is a studio of storytellers and so the hope is that this sensibility translates to the studio’s first major attempt at the GaaS model; As for the endgame, it’ll no doubt take a few weeks for the community to get a proper read on how much work this area of the game will need and just how much the world-shifting Cataclysm events will really change the state of play.

As for console exclusivity? It only hurts the players. We can make our peace with a console-exclusive vanity item or two, but having whole segments of content walled off because you can't afford two consoles and have somehow ended up with the "wrong" one is shortsighted and wholly anti-consumer. It'll be interesting to see how EA's hardware partnerships will affect the fortunes of Anthem players but, given how the release schedule took a complex graph to explain, the publisher isn’t off to a great start.

In both Massive and Bungie's cases, however, there was one thing the studios did right; they listened. When fans complained of a dearth of sandbox play and repetitious busywork, both companies worked to right the wrongs of their original releases. Of course, we can only hope that, in Anthem's case, it won't even come to that but, if it does, that BioWare is ready and willing to respond.