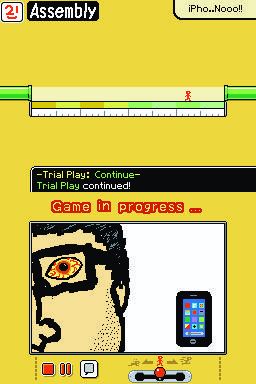 We’ve always suspected the WarioWare team must have invented some kind of instant brain-tapping gadget that sucks ideas out of their heads and converts them into mad little microgames. There’s no other way to explain the inventive insanity of the WarioWare series. If the designers had to explain their ideas to a programmer, the magic might evaporate.

Alternatively, perhaps they use Doctor Crygor’s patented Super MakerMatic 21. That’s what you get in WarioWare D.I.Y., and short of plugging wires into your head or learning to program computers and stuff like that, it’s as clean a method of cutting out the game-creation middleman as we can imagine. Once you figure out how to work it, anyway.

It can be quite boring to begin with. You have to go through some tutorials at the start, and in a rare instance of an overly self-indulgent translation job by Nintendo, all the important information is buried amid some long-winded comic sketches between the teacher and a clowning Wario. After about an hour of tapping at the screen to skip through page after page of rubbish jokes mixed in with the odd bit of sage advice and plenty of idiot-level repetition, we binned the rest of the tutorial and jumped straight into the Super MakerMatic, which was finally unlocked.

Luckily it’s so brilliantly designed that it’s possible to figure out almost everything with only a cursory glance at the instructions. The secret is its simplicity (you can only make games controlled by tapping an object with the stylus), and within its tight restraints it’s possible to create some completely amazing things.

You start by drawing some objects – a bowling ball and some pins, for example. Then you head into the Assembly screen and set them up where you want them to appear at the start of the game. Easy. When that’s done, you define the rules of the game, giving it some simple artificial intelligence. Tap the ball, select the option to tell it to move towards a target, and choose how fast it goes. Next up, you add AI to the pins, so they scatter when the ball touches them. Head back into the graphics editor and you can easily animate them falling over.

That’s basically it. You’ve just made a bowling game, although you might want to add some sound effects to make the animation more convincing, and maybe a moving target so there’s a bit of challenge to it. You could draw a background that looks like a bowling alley and give it a jaunty theme tune. Your first effort won’t take more than an hour before it’s looking very tidy.

Then the game is ‘shipped’ to your collection of home-made masterpieces, of which you can store up to 90. You’ll find a similar number of pre-made ones, which are also sent to the virtual game store every now and then and will compete with yours in some sort of arcane sales chart. You can also make records with a sequencer based on the commendably usable music editor you get with the game creation package, and four-panel monochrome comics, which offer plenty of mischievous potential.

It’s incredibly addictive, and eats up time like no other DS cart. We noticed we’d got a medal for spending ten hours designing games when we thought we’d done four or five, tops. The one essential component that this creative suite doesn’t offer as standard, though, is somebody to share your designs with. The more people you canmake fun ofin cruel minigames, and the more like-minded souls you can laugh about it with, the more fun you’ll get out of it. As satisfying as it may be to design a fully functional bowling game from scratch, it’s miles better to poke fun at your friends and family. If you want to recreate the time when Dad broke both his legs on that skiing holiday, WarioWare D.I.Y. is the perfect tool.

You can upload the games for viewing on your Wii or you can link up with other DS owners and share games. As long as you don’t lock your content to prevent editing, your friends will be able to refine your stuff, lifting entire backgrounds and animations to create variations that you can then play in sequence like a proper WarioWare game.

You’re limited to games that involve tapping the screen. You can only use one pre-defined palette of 16 colours. Animations run to a maximum of four frames, and music can only be two measures long. If it sounds extremely limited, that’s because it is, but working in such confines gives you the opportunity to let your imagination run riot. It’s as deep, as simple, as long-lasting and as hilarious as you want it to be.