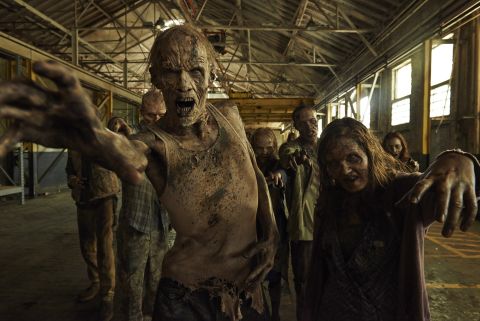 After last week’s fireworks, things settle into a more leisurely pace. With everyone getting on more or less okay, you may even start to think that The Walking Dead is going soft. That is, until the last few minutes which take the show to an exciting new level of barbarity. Hooray!

Before then, however, this was an episode concerned with tying up loose ends and rearranging a few relationships. Oh, and wasn’t that a lovely pre-credits sequence, with the survivors striding purposefully away from Terminus? You get the sense of a new, more unified group emerging as the gang finally decide to make the trek to DC with Abraham and Eugene. Ty and Rick bond some more. Carl starts to wield more influence over his father. And Bob and Sasha look happy.

The fact that Bob gets to speak in more than one scene, and that he’s having a nice time, is pretty much a dead giveaway that he’s not long for this earth. So when he gets kidnapped and trussed up by our old friends, the Termites, it’s not a huge surprise. What happens next, however, kind of is. Bob waking up to find his captors eating parts of him is genuinely nightmarish. Even if you’ve read the Fear The Hunters arc – which this is now clearly, unambiguously, following – it’s still a visceral shock to see it translated on screen. He’s not dead by the end of the episode, so who knows, he may live to fight another day, but it’s not looking good, is it?

It’s also a strong episode for Carol and Ty. They have had perhaps the hardest time of all the survivors and it was pleasing to see the show take some time out to examine that and where they are in their lives now. They may have reached a degree of acceptance over their actions, but that doesn’t mean that their losses have been forgotten. It’s almost redundant to say it at this point, but Melissa McBride is consistently excellent, and Chad Coleman is really developing as Tyreese.

The other notable aspect of “Strangers” is Carl and Rick’s relationship, and their differing views of the series main theme – when is violence justified? Rick is taking a fairly sour, nihilistic view of the world nowadays, as well you might when your life consists mostly of chopping up dead people. He has accepted that violence is a part of his everyday life. Carl, on the other hand, wants to use his power positively. He sees this as an opportunity to help the helpless. I can’t quite see The Walking Dead turning into Angel any time soon, but it’s interesting to see the next generation adapting to this dark world better than the adults. Previous seasons suggested that Carl might take a dark path, but unless something dramatically horrible happens to him then that’s looking increasingly unlikely. Then again, this is The Walking Dead…

One slight niggle. The search for a cure storyline is getting quite a lot of build up. But we know that, by the very nature of the show, we can’t possibly find one. AMC wants The Walking Dead to still be running in five years time so it seems unlikely that this particular storyline will amount to anything significant. Building up to an inevitable disappointment is a dangerous game to play with viewer expectation…

Gabriel the shifty vicar is automatically a suspicious character and you can’t blame Rick for mistrusting him. His scowl when Gabriel says “The word of God is the only protection I need” is priceless. Seth Gilliam does a good line here in making him both creepily smug and slightly sympathetic.

It’s not Bob who gets munched on in the comics. Instead, this nasty fate is reserved for Dale, already long-dead in the TV version.

Gareth: “I just hope you understand that nothing happening to you now is personal.”

The Walking Dead airs on AMC in the US on Sunday nights and Fox in the UK on Monday nights.