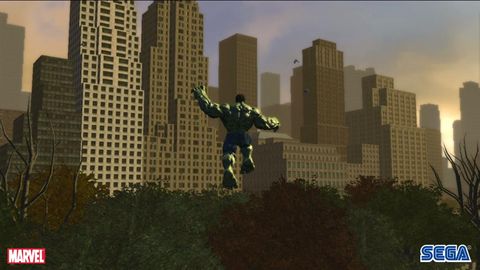 The people that made the 2008 rendition of The Incredible Hulk must have really liked 2005'sThe Incredible Hulk: Ultimate Destruction. They've employed the same free-roaming design and have given the Hulk many of the same abilities that he had in that earlier game. But that's totally A-OK, since they've also jazzed up the graphics and given players many more ways to destroy the people and buildings populating the expansive 3D replica of Manhattan that serves as the game's world.

Similar to Grand Theft Auto or Crackdown, you're left to your own devices within the city. As the Hulk, you can go anywhere you like, climb to the tops of buildings, and use your brute strength to smash cars, punch pedestrians, and knock buildings to the ground. When you tire of fighting the generic tanks and helicopters that respond to your destructive rampages, you can play mini-games or visit story markers that will send you out on missions based on events from the comics and the 2008 feature film.

Players get the chance to face off against Thunderbolt Ross and Blonsky's "Abomination" from the recent film, along with familiar comic book adversaries such as the U-Foes, Bi-Beast, and Iron Man in his Hulkbuster armor. Numerous costume choices allow you to ditch the movie-styled look for something comic appropriate, including Gray Hulk, Classic Hulk, and the new Red Hulk that was just recently introduced in the Marvel universe.

Missions typically challenge you to destroy a certain number of enemies, protect someone, or retrieve an item under heavy firepower. Hulk's abilities are equally straightforward: you can leap, you can punch, and you can pick up and throw stuff (people, cars, signs, chunks of buildings). The Hulk's over-the-top moves make the whole thing fun. Cars can be ripped in half and worn as boxing gloves, tanks can be transformed into maces, and rage powers let you literally knock down an entire city block with a vicious ground pound.