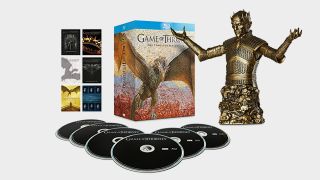 With the likes of Netflix, Hulu, Amazon Prime, Crackle, and a cacophony of other streaming services all offering instant access to the latest shows with the press of a button, the ancient art of buying and using a box set by physically placing disc after disc into a machine sounds practically medieval at this point. But box sets aren’t quite dead yet. You can never guarantee that your favourite show will stay on Netflix for the entire time you’re watching it, for instance, but the physical disc lasts forever... unless you count its slow but inevitable degradation into a pile of dust, that is.

Plus, box sets offer an opportunity for studios to get creative, packaging hours of viewing content into unique cases that range from the majestic to the downright bonkers. Some, though… some are just so crazy and ridiculous that you simply have to own them, even if it’s unlikely that you’ll ever watch them again. Here’s our pickings of the best TV box sets that you can buy right now.

Like the quality of the show itself, the various box sets for The Walking Dead have fluctuated wildly in terms of appeal over the years, ranging from the plain ugly to the outright bizarre. The best of the bunch for now remains the limited edition blu-ray set for season 4 which, unlike the others, actually features some degree of colour and visual flair.

Let’s not beat around the bush; you’re paying for a model of a Walker stuck to a tree, but you have to admire the craftsmanship on the bark, foliage, and rotting flesh. Plus, season 4 is one of the better slices of Walking Dead storytelling, so you might even be tempted to re-watch the thing once you’ve placed that tree Walker next to all those family photos.

Because nothing says caring for the Earth like excessive packaging for a digital product. I’m not sure what David Attenborough would make of this, but the globe casing does act as a nice mantlepiece item for those into their thought provoking documentaries.

Planet Earth is a prestigious work of filmmaking, and re-watching its first season reminds you why everyone became so in love with this rare and exquisite beast of a show in the first place. Just remember; while the show itself is very informative and educational, don’t take the packaging as confirmation that the Earth’s core is filled with neatly wrapped DVDs.

One of the rarest and most expensive collector’s items on this list, the Family Guy Total World Domination Collection features seasons one to six of Seth McFarlane’s raunchy animated sitcom, all of which are encased within Stewie Griffin’s football-shaped cranium.

It’s a bit of an eyesore to those unfamiliar with the show, to be honest, but any fan can appreciate why this thing is going for upwards of £285… actually, no, that’s far too much money no matter how you look at it. Either way, if you own this little gem, consider yourself lucky; you’re in possession of a highly sought after collector’s item.

In another case of “I suddenly feel really old”, you’ll either be delighted or shocked to learn that it’s been over 20 years since Buffy first began slaying vampires on our TVs, and Fox celebrated the anniversary last year with a special edition box set for fans and neophytes to tuck into.

There’s nothing particularly special about this set in terms of packaging, though it certainly looks nice, but Buffy is just that good that it deserves a place on this list. You’ll be getting seven seasons of scary, hilarious, heartbreaking adventures with Sarah Michelle Gellar and the gang, and frankly, that’s more than enough to warrant a purchase from me.

Everything’s better when it’s shiny. Just ask the three eyed raven. Season one to six of Game of Thrones is worth watching regardless of whether you own a giant bronze bust of the Night King, but I reckon the viewing experience would definitely be that little bit spicier if his metallic torso was sat next to your telly.

Not only is the bust made of bronze, but the box set’s sleeve is made of dragon skin… or the closest real world approximation to dragon skin that may or may not have been shed from a non-fire-breathing reptile. You’ve got heaps of time to catch up before Game of Thrones Season 8 arrives in 2019, so start the right way with this fairly affordable edition.

What is it about animated shows and stuffing their box sets into giant plastic heads? More importantly, what do you mean you haven’t seen every single episode of Futurama to have ever released over its 14 year run? You ought to change that, pronto, just in case someone makes a Hypnotoad reference and it goes right over your head.

This collection of the first five seasons is a good place to start, which also includes the original four feature films and comes wrapped up inside Bender’s conveniently empty noggin. Considering how much the sassy robot bachelor refers people to his backside, you’ll be pleased to know this one doesn’t come with any sound effects.

We all remember the barrel from Breaking Bad... what (or who) is in it, and how it’s used by devious scientist turned cartel kingpin Walter White. But you won’t find any disintegrated innards in this box set barrel.

Instead, you’ll have access to all five seasons of one of the best television shows of all time, in addition to hours of exclusive featurettes and even a couple of physical goodies to go with it. Because life isn’t complete without a Los Pollos Hermanos cooking apron.

Yes, yes, we know that every season of Friends has just come out on Netflix. We even ranked the best Friends episodes of all time in celebration. But, but, but… there’s still good reason to buy this Blu-Ray box set yet. It comes with new digital exclusives never seen before anywhere else, including unaired footage, a documentary, new interviews, and “never before released cast appearances” (yeah, I’m not sure what that means either).

For the price you’re paying, over 110 hours of viewing content is a pretty ace deal. What’s more, there’s only 20 discs compared to the original DVD box sets hefty 40, halving the amount of times you have to get up and insert another one into the Blu-Ray player.

If all the Star Trek Discovery Easter eggs have reignited your inner Trekkie, there’s no better way to feed that hunger than with this swanky box set from 2016. As part of its 50th anniversary, Paramount produced a limited edition bundle for The Original Series, The Animated Series, and all six classic movies, all of which have been remastered for high definition.

On top of that, you’ll receive exclusive collectable artwork and a special Starfleet 50th anniversary insignia badge, in addition to the reams of digital features and bonus content that you’d expect from a package of this nature. Let’s be honest; one look at the gorgeous box art, and you’re already in love.

If you were able to physically drink a season of It’s Always Sunny in Philadelphia, I’d imagine it would taste like a stale, flat can of Boston Lager mixed with cigarette butts and rat droppings. That’s not a slight against the show, mind; it’s lack of pretension is precisely what makes it great.

Luckily, this It’s Always Sunny “six pack” is more of the watching variety, with five seasons and a Christmas special to enjoy, but you have to laugh at the cleverly themed packaging. No, this doesn’t come with actual cans of the gang’s favourite alcoholic beverages, but for US fans, who recently had the brazen-faced sitcom taken away from them by Netflix, this box set is an immediately attractive alternative.