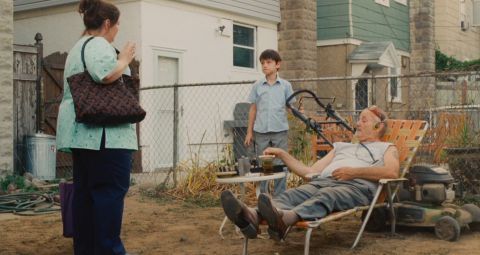 There’s something wonderfully crumpled about Bill Murray. Even if you took an iron to him, the creases would probably pop back up in an instant. And he exploits this lived-in quality to the max in St. Vincent, a comic odyssey from writer/director/ producer Theodore Melfi about a Brooklyn grouch with barely a good word for anyone.

Admittedly, Murray has toyed with failure before – not least as a washed-up actor in Lost In Translation. But Murray’s Vincent, a Vietnam vet who lives alone with his Persian furball of a cat, Felix, seems to wallow in it. He drinks. He gambles. And he occasionally has sex, with a pregnant prostitute named Daka (Naomi Watts, with a borscht-thick Russian accent).

The only thing slightly out-of-character is his weekly visit to Alzheimer’s sufferer Sandy (Donna Mitchell) at a nearby retirement home. Otherwise, he’s a cash-strapped recluse who is happily guzzling his last days away. Until, that is, single nurse Maggie (Melissa McCarthy), still recovering from a tough divorce, and her 12 year-old son Oliver (Jaeden Lieberher) move in next door.

She quickly starts imposing on him, asking if he’d watch Oliver after school. Naturally, given his selfish bent, he charges her by the hour; and given that he soon takes Oliver to a bar and the racetrack, you suspect he’d give Billy Bob Thornton’s Bad Santa a run for his childcare money.

No prizes for guessing that Vincent and Oliver forge a mentor-protégé bond, though it’s nowhere near the competitive, combative relationship that Murray and Jason Schwartzman drummed up in Rushmore. With Oliver in dire need of a father-figure, Vincent shambles in, unwittingly, even showing him how to down bullies with a swift blow to the nose.

Murray’s physical comedic skills clearly haven’t deserted him – as one brilliant early scene where he endures a domestic accident in his kitchen demonstrates. His laid-back vibe ensures the sickly endgame never feels too overcooked. Watts, meanwhile, almost steals his thunder, if only because of her how-far-you-can-push-it accent and outfits.

There’s an ambling, first-draft quality to the script that doesn’t always serve the story well (note the ill-conceived role for McCarthy’s Bridesmaids co-star Chris O’Dowd as a Catholic priest). But as a vehicle for the might of Murray, Melfi can give himself a back-pat. While it’s not quite up there with his work for Sofia Coppola or Wes Anderson, St. Vincent is further proof that there are few better American comic actors working today.