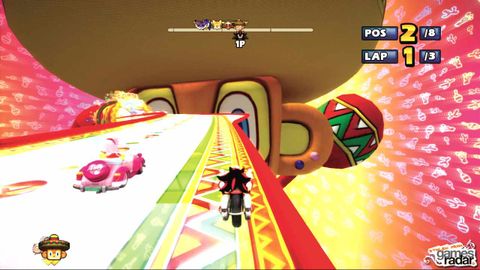 Ladies, gentleman and small prickly rodents, welcome to the most exciting kart racing event of 2010. In pole position is a portly plumber with years of racing experience and plenty of miles on the clock. New to the grid is Sonic in his first karting game. The firing pistol is primed, the chequered flag has been unfurled and the engines are starting to rev…

Yes, it’s like Mario Kart. There, we’ve said it. That low level hum you can hear is the sound of a thousand rabid Sega fans grinding their teeth in consternation because we’ve started this review by mentioning that racer, but the comparisons are unavoidable. It’s a fact that isn’t lost on Sega and developer Sumo Digital who, as a result, have turned in a handsomely made and eminently entertaining racer. This is arguably the first real challenger to the Nintendo series’ crown.

Take a look at Sonic and Sega All-Stars Racing’s paint job for instance and you can’t help but be dazzled. It’s shiny, sleek and every detail has been lovingly designed. From the game’s opening cinematic, to the menus, to the achingly vibrant tracks – it’s a beauty. If it were a car, it would have no trouble turning heads. Special mention should go to the track design, which defies gravity and often sense to provide some tremendously exciting moments.

At its best, the game resembles the mother of all cheese dreams. From a track adorned with a giant, leering Amigo pinata, to crashing through a billboard in cellshaded Tokyo-to, to shunting a rival into a zombie pedestrian at the Curien Mansion – the thrills are as numerous as the game references.

But how does it look under the hood? After all, if your Ferrari has the engine of a clapped out motor boat then you might as well leave it in the garage. Luckily SASAR plays very nicely indeed. Racing is a matter of mastering the stick and the two shoulder buttons, while winning involves mixing the gas button with the drift button on corners for speed boosts along the straights.

On paper it sounds like an alarmingly simple concept, but it’s a bold move that works in the game’s favour. As a result, the design work that’s been poured into the game’s cars, tracks and engine (that’s the game engine, folks) is allowed to speak for itself. Credit should go to Sumo Digital, who have done a fine job of translating OutRun 2’s effortless thrills to an altogether more colourful (and arguably more casual) type of game.

It isn’t all chirpy characters, trippy scenery and high-speed thrills, though. The spanner among the spark plugs comes in the shape of the game’s assorted weaponry. It’s here that comparisons with Mario Kart become unfavourable, and everyone’s favourite plucky plumber pulls ahead.

This is because the array of weapons on offer are singularly uninspiring and overly familiar. Essentially, boxing gloves are green shells, missiles are red shells and traffic cones are banana skins. They feel like generic stand-ins, and for anyone who’s ever played a karting game before, there’s little need for experimentation.