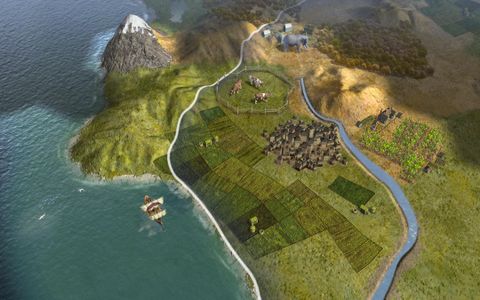 Civilization is, let's face it, a hardcore series for hardcore players. For all the recent hubbub about Civilization Revolution, the "dumbed down" console version, this franchise remains one that's by grognards, for grognards. Civ V, the latest iteration of the venerable series, changes a few things (mostly for the better), but at its core, it's still about culling a lot of information from disparate sources, making command decisions, and then watching those decisions play out, turn by turn.

The old-school Civ faithful will probably want to know what's changed this time around from Civ IV, and the potential newbies will likely wonder why they should care. So, the biggest stuff first; and that'd be the three C's: combat, culture, and city-states. These three elements are what's going to define Civ V among its brethren in the series.

First and foremost: combat. Unlike previous iterations that had a square-based layout, Civ V uses a hex-based system for its maps. The hexes allow for more realistic movement in more directions, and they also allow topographical features to have more importance and complexity than they did with the basic four-sided tiles. Additionally, military units cannot be stacked on a single tile as they could in previous Civ iterations. This means the mega-awesome-killer stacks of units from previous series titles are a thing of the past. Instead, you'll need to use much more realistic tactics when it comes to deploying your armies: positioning artillery behind tough units, and shock troops in front of those. Combat mechanics have also been revised so that the infamous "archer killing an Abrams tank" because of a lucky die roll dealie really can't ever happen anymore. All this adds up to making battles in Civ V feel much more like real, historical conflict, with momentum shifts, strategic initiatives, and a genuine sense of achievement.

The second big tweak is the way that Civ V handles the all-important culture generated by a given society. In previous games, culture was a sort of milestone that mostly affected your nation's borders: get enough of it and your borders expand out concentrically, sometimes pushing back the borders of rival nations. This time, though, culture works like a resource: you build it up and store it so you can spend it later on "social policies." These policies can have major effects on your society, giving you bonuses to everything from how much food you generate to how well your troops fight. Additionally, all the social policies are grouped into trees, most of which can only be unlocked as your society progresses to a certain technological level, and some of which are mutually exclusive with other trees. No matter which trees you go with, you'll generally end up shaping your society along the lines of the social policies you choose – and this really helps you craft a sense of story about your society and what its ostensible values are. Of course, culture still controls borders, but this time borders expand further out from your cities than they did before, and expand logically, going into the prime terrain first, rather than simply growing concentrically. You can also spend gold to buy new land around your cities, which is a nice option for those who want to prioritize certain territory right off the bat.

The final big tweak is the addition of city states to the game. These are AI nations, but typically comprise just a single city, and exist pretty much only to be a help or hindrance to the players. They come in several flavors that provide their allies with culture, ships, or ground troops. They also often control important strategic and/or luxury resources, which they'll offer as gifts to their allies as well. This means befriending city states is really an important and powerful aspect of the game, and it's something players will want to spend a lot of time and resources doing if they want to win ('course, you can turn city states off entirely in the options, if you like).

Now, how you get city states to be your allies is really down to two things: accomplish tasks for them in the game world (such as destroying rival city states or building certain wonders), or give them gold. In practice, you'll mostly end up bribing them, but no matter what you do, having enough of these guys on your side can really swing the balance of power in a game over to you. For example, if you want to concentrate on going for a cultural victory by building wonders and temples and theaters and such, you can just use your extra money to pay off militaristic city states and have them help you out with troops, freeing you to rush wonders and dominate on that aspect.

And speaking of cultural victories, most of the core concepts from Civ IV are still pretty much intact in Civ V: you win the same ways, either by dominating on culture, military, diplomacy, or science. And the technology tree works pretty much identically, as well (minus Leonard Nimoy to speak the quotations associated with each technological advancement). Apart from the hexes, the game mechanics are largely the same this time around, too: certain tiles have valuable resources which may be required for building certain types of troops or buildings – the difference is that this time, a single instance of a resource won't give you unlimited ability to make things with that resource. One iron deposit will only give you enough iron for a certain amount of troops, so you need to make hard decisions about what to construct and what to trade for… and what to try to take over by force. This adds a valuable layer of realpolitik to the game world, and helps make you feel like you're genuinely at the head of an empire.

In all, the news with Civ V is just about all good. It's still not very accessible to non-grognards, and it's still fairly boring when it comes to multiplayer (turn-based games just involve too much waiting around for other people to finish up). But it's also still incredibly addictive, begging you to stay up just five minutes more, just to see what happens in the next turn. And the next turn. And the next.