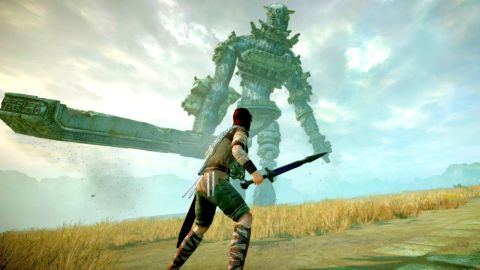 Both a great remaster and an enjoyable ‘new’ game in its own right that takes you on a journey in a way few things can.

I wasn’t sure at first if this new Shadow of the Colossus could capture the magic that made the original such a hallowed classic. The first colussi dropped in a minute with barely any effort. The second and third went the same way soon after. Maybe this is one of those games that was better as a memory? Not everything ages well. Then, without me exactly knowing how, it was 1am and I was seven monsters down and chasing my eighth as fast as my horse could carry me.

So, yeah, Shadow of the Colossus has still got it. Even if ‘it’ is really hard to define: you ride through a barren, empty landscape alone with your thoughts - sometimes for ages - and, occasionally, climb all over some huge monster like a tiny murderous ant, stabbing the living hell out of it. Somehow, it’s amazing. Although it is tricky to explain why the contrasting gulf between barren contemplative journeys, and the ridiculous highs of clinging to the shoulder of an angry furry skyscraper, can have such a profound effect.

The quieter times have an almost hypnotic quality. You have your horse, Argo, a sword that shines a beam of light in the direction of your next conquest, and little else. As you explore, the emptiness draws you in. You all but pour yourself into into the space it provides in an attempt to fill it. The landscape changes over the course of the game - there are deserts, forests, swamps, hot springs; or occasional ruins, a tower here, an arch there - but with no explanation or distraction your mind wanders over it all, like a hand feeling through the dark trying to work out what it’s holding. It’s a reflective experience. This was a world that clearly served a purpose at some point, with the smallest textural changes stirring a pot of thoughtful questions.

Unscalable heights: The inimitability of Shadow of the Colossus

In stark contrast there’s the massive monster murder, which is what most people talk about. For a game that basically only has 16 enemies, it shows how well its narrative and gameplay journey was originally designed to make it still feel like such a journey. Things start simple - most early colussi are easily defeated by getting on them, navigating fur and architectural outcroppings, and finding a glowing blue mark to pierce to hell and back. The hardest thing to deal with initially is finding time for quick stamina boosting breathers on what is essentially an ass shelf, or shoulder balcony. But such a simple concept develops beautifully over time. You’ll need a trick or a lure to reach a climbable area; armour needs to be destroyed; a hail of arrows might be required to attract attention, or the weak spot moves about after a couple of pokes. By the time you reach the final numbers, what was a simple climb and stab operation has developed into dauntingly huge undertaking, as you use various tricks to manipulate and scale creatures that, in many cases, can be measured in miles.

Nearly all these battles have a ‘holy shit I can’t believe I’m doing this!’ moment. For me, one of my greatest gaming moments of all time is fighting Avion, the bird-like number five colossus who dives in to attack almost as soon as you see him. I did the same thing this time that I did when I played the original game 12 years ago - I jumped and grabbed a passing wing without even thinking, and then holding on for dear life as the world turned to nothing but roaring wind and regret. Almost every encounter combines scale, gravity and angry monster shaking to create a rush that’s hard to best because nothing else really does anything even close. It feels a lot like this:

Except when I do it I’m holding a sword in that hand and… it doesn’t end well for the cloud dog.

The clever thing between this and the original (and the previous PS3 remake) is that it’s effectively a complete do-over. The landscape, colussi, attack patterns - even your slightly floaty jump - are all perfectly recreated, but the buttons have had a crucial modern rethink. The original PS2 layout worked at the time, but now feel like a control scheme from a forgotten age. It’s almost painful to get your brain around now, even on the PS3 HD remaster (which is why I never made it past the first few colossus that time). On PS4, though, things have been remapped in a much more intuitive way for today’s muscle memory, preserving the essence of the original while making everything more manageable.

There are a few hiccups. The horse is basically terrible at anything other than going very fast in a straight line, and it’s often easier to get off and go on foot if you want to do anything else. The game also seems to make a slightly glitchy distinction between fur and ledges - the first you can climb freely, while the second is more for hanging from. Very occasionally you can get ‘stuck’ on a hard edge without realising if you wander too close. It’s easily fixed once you work out what’s happening but, when you’re being rattled around furiously on a 300 foot ape’s granite shoulder pads, it can be hard to concentrate.

There’s also a couple of colussi that aren’t quite perfect. The two smaller ones, Celosia and Cenobia (11 and 14 to their friends), both have an ability to smash you to the ground and attack again before you can get up. If you’re not careful it creates an inescapable death loop. There are also a couple of places where the fight occurs in defined stages and, if you’re not where the game wants or expects you to be, you just get a cutscene that puts everything there anyway. These aren’t big deals, they just break the moment in an otherwise ethereal atmosphere.

Despite a couple of minor quibbles, Shadow of the Colossus works on both its intended levels - as a returning nostalgia blast for those who remember it, and an enjoyable game for newcomers. The apparently disparate parts, those long journeys filled with solitude and massive boss battles, are tied together by a strong personality that develops and draws you in. It’s like poking around a house where someone died, looking at things you know are important but with no one left to ask why. It’s still a mysterious thing to play, that feels as thought provoking and artful as it did all those years ago on PS2.

Shadow of the Colossus

Both a great remaster and an enjoyable ‘new’ game in its own right that takes you on a journey in a way few things can.