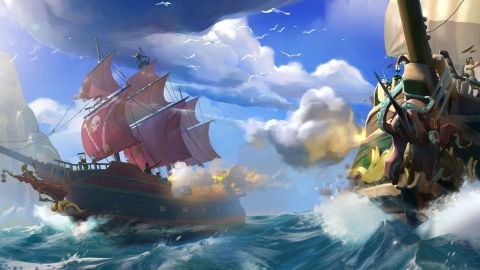 Sea of Thieves is bursting with potential for storytelling in a watery paradise, but doesn’t have enough to keep players coming back.

Sailing back to the Dagger Tooth Outpost, we knew we’d done alright for an afternoon of pirating. With three chests and a mysterious glowing skull to sell, the idea of more gold jiggling in our pockets in the very near future was a tantalising thought for the GamesRadAARGH crew. There were no other ships in sight, and a good wind at our back, so we thought we were home free. But then, the waters around us started turning black. We paced the decks, wondering what was going on, but before we could even mull over some ideas or just sail away, eight massive tentacles emerged from the depths, surrounding our Galleon. The Kraken.

Queue the screaming and running around on deck with our arms flailing. I tried to steer the ship to safety, but it was too late. Zoe was ripped from the lower deck by a rogue tentacle, while JJ attempted to work the cannons. The next thing I knew I was hoisted into the air from behind the wheel into some kind of mouth, and despite much cutlass waving, all three of us were in its grasp and we were watching our precious ship - and all our treasure - disappear down into Davy Jones’ locker.

An anecdote generator at its very best

It’s tales like these that make Sea of Thieves a wonderful, watery, playground. The game never hand-holds you, or forces you to go down a certain path, encouraging you to instead create your own stories. It lives in the moments of “I can’t believe that just happened...” and “Remember when...?”, because there’s nothing quite like getting a crew together and just casting off, not knowing quite what’s going to happen next. The stories you create as a group of friends - whether it’s just getting totally grogged and vomiting on each other, giggling away down the mics, or taking on the Skeleton Fort and coming away with the loot - are what’s going to keep you coming back for more.

In that way, Rare’s first emergent world game has been a triumph. The studio has created a stunning map with the best water I’ve ever seen in games (seriously, just watch the way the waves break over the hull of your ship and tell me you’re not mesmerised) that’s totally filled with potential for storytelling, but not a lot else.

Be a better pirate

You can pick up missions, or journeys as they’re known in Sea of Thieves, from three different factions: Gold Hoarders, Order of Souls and the Merchant Alliance - and to begin with they all feel distinct and unique. Gold Hoarders missions give you a treasure map with an X marking the spot to go and dig at, while the Order of Souls want the glowing skull of an undead pirate captain and the Merchant Alliance work by trading animals and rare goods, including chickens, pigs and snakes. That might all sound well and good, but when you really start diving into Sea of Thieves you’ll quickly realise that everything you’re doing is an elaborate fetch quest. Sail to an island (or several if you’re looking for chickens), find the thing, protect the thing, take the thing back to an outpost, sell the thing. The events that happen between these points is where the game thrives, but if you’re playing on your own it can all start to feel very repetitive indeed.

Other pirates are problematic

Of course, you’ve got to factor in the other pirates sailing the seas in your game too. As Jean-Paul Sartre famously said, “hell is other people” and in Sea of Thieves this is very much the case. Although there are times when meeting other pirates is a distinctly pleasurable affair - I remember a time where I met a fellow solo slooper and we danced by the Gold Hoarders’ hut after trading in our respective booty - unfortunately, for the most part, other pirates are the worst.

Take this one tale for example. Zoe and I were having a lovely evening treasure hunt, and spent far too long solving one particular riddle, but we did it and were trotting back to our boat with the chest, only to find it had totally disappeared. Then we saw it. The Galleon sailing away from the island with our lovely little sloop trailing behind it, sailed by one of them. While waited on the island with the loot, I used the siren to teleport back onto our stolen ship, and there were two guys waiting for me. A quick blunderbuss shot to one of their faces sent them straight to the Ferry of the Damned, and a second pushed the other thief into the depths.

But even though I had regained sloop ownership and managed to circle back to Zoe and the loot, our fight wasn’t quite over yet. The pesky pirates tailed us all the way to the Outpost, all the while attempting to cannonball us out of existence, but we managed to make it to shore with our loot and hide away in the clothes shop, while we waited for them to hit the beach. The irony of two girls hiding out in a dress shop wasn’t lost on us either by the way. The things we do for vengeance.

It all ended in a shootout on the beach (one of the three of them died), a ship ramming competition (which we lost) and several trips to the Ferry of the Damned, but the relief we found when we got to respawn with a brand new ship on a faraway island was palpable. And I’ll note, you can literally do nothing apart from sail if you steal someone’s ship, unless it’s got a belly full of plunder you can pilfer.

There’s an argument that, obviously, this is a game about pirates. Dirty tactics are very much on their resume, and although this particular adventure was fun in parts, there’s no doubting that pirates can be rather unpleasant. That’s particularly true at outposts, which strangely enough aren’t safe havens you can just get your grog on in. They’re still very much PvP zones, and other people can camp out by faction huts to kill you just before you hand in your hard earned loot. Or even camp out on your ship, killing you with barrels of gunpowder every time you respawn. And yes, both of those are things that have actually happened to me. Not quite the jolly romp Rare has been advertising.

Stories can’t carry you all the way to pirate paradise

What Rare has created is a storytelling service, but it’s like it hasn’t really thought about the kind of stories people want to tell. I, for one, would love an option to turn PvP off and just have a way to enjoy the blissful nature of sailing around the map, collecting treasure and mucking about with my friends, without the constant stress of someone sinking our ship with all our plunder inside. I’d also have liked to customise my pirate at the start too, because although I’m quite partial to my lady pirate’s giant moon face, it seems amiss to only deliver pre-made characters in a game that’s all about storytelling.

But jokes about giant faces aside, even when you throw in the Skeleton Forts, which act like MMO raids symbolised by skull clouds in the sky, all Sea of Thieves has bar fetch quests is its stories. I’ve still only seen one Kraken in the many, many hours I’ve sunk into Sea of Thieves, and there are plenty of odd design choices that make the missions a little irksome - from issues with chicken coops to bugs preventing entire islands from loading. That’s not to say that the stories you create aren’t brilliantly hilarious, but stories can only last you so long before the thinness of the actual content is exposed. Rare has plans to expand the map and add more content to the game as the months go on, but in its current shape, Sea of Thieves doesn’t have the (sea)legs for longevity or a sustained player base.

Reviewed on Xbox One S.

Sea of Thieves is bursting with potential for storytelling in a watery paradise, but doesn’t have enough to keep players coming back.