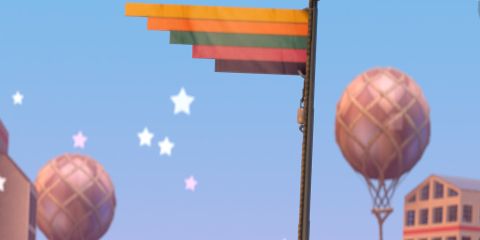 Bit.Trip cut its teeth on grueling retro-style games, so it’s no surprise to see the developer return to its roots with a new adventure chock-full of old-school goodness. The result is Runner 2: Future Legend of Rhythm Alien, a fantastically bizarre take on endless running. That’s not necessarily a bad thing, though. The basic controls focus on expert timing and focus, and the game is a conflicting mix of wonder and frustration.

The setup is terrifically crazy. The game opens with a hilarious commentator (voiced by Charles Martinet, the voice of Mario) recapping the events of the previous games--complete with wacky “brought to you by…” commercial sponsors--which sets up the latest adventure of Commander Video. As the game starts, Video’s nemesis, the Nefarious Timbletot, has unleashed a reality-collapsing plot of revenge. Bit.Trip's stalwart hero is sucked through a time-space vortex into a dimension of side-scrolling mayhem.

Like Bit.Trip’s other releases, frustration is a major part of the overall Runner 2 experience. The primary focus of the game is perfecting a run through each of the short levels, relying heavily on trial-and-error to get you by. For those who revel in mind-numbing difficulty levels and replaying levels over and over until they reach perfection, Runner 2 is superbly satisfying. Thankfully, there is an easier difficulty setting for non-sadists, and the inclusion of optional checkpoints makes things much more manageable.

For a downloadable game, Runner 2 certainly offers plenty of gameplay. Players must master 125 levels of constant running, jumping, sliding, kicking, and other actions across gorgeous side-scrolling landscapes. After a while, the buttons to keep track of amidst the hectic pace can become more than a little overwhelming. The response time of the controls also never feels dead-on precise. This forces the player to predictively react to the next obstacle more than instantly react, leading to more frustration.

Those looking for an even greater challenge can also pursue high scores by collecting gold bars and red cross icons that are scattered throughout levels. Comprehensive leaderboards round out this process. Further, each of the five worlds includes a boss to conquer at the end and secret levels to unlock.

The graphics are sharp and well-animated, making the wonderfully weird and detailed landscapes and characters even more enjoyable than previous games in the series. The character design--including a host of unlockable playable characters--is terrific and the worlds are just full of eye candy, with kooky creatures, scenic views, and strange activity always in the background. The game masterfully uses its soundtrack to punctuate successful moves. A flawless run equates to a smooth and nearly hypnotic trippy techno groove and there’s an addictive sense of satisfaction in creating a perfect score--both musically and numerically.

The beautiful graphics and quirky charm make it easy to fall in the love with Runner 2, even when playing through the same level 50 times. The frustration level here is undeniable, yet Runner 2 still inevitably forces the player to take on just one more level. It’s an insane retro-dripped trip worth taking.

This game was reviewed on the Wii U.