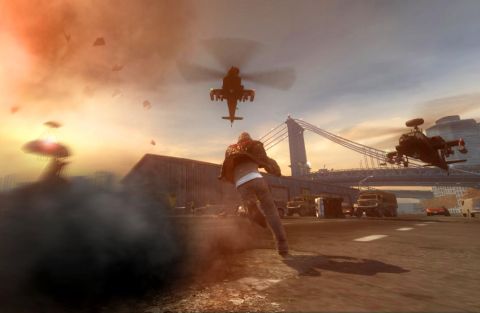 If you’ve ever played 2005’s The Incredible Hulk: Ultimate Destruction (or the lukewarm 2008 follow-up from Sega), then you know that its “hero” aspect is largely inconsequential. Who cares about saving puny humans when you can make boxing gloves out of their cars and smash their buildings into rubble? Being a rampaging monster was a lot more fun than trying to be a good guy, and that was something Radical Entertainment – also the developer of Ultimate Destruction – seems to have taken to heart when creating Prototype.

Above: Go on, embrace your inner murderbeast. You know you want to

While it looks like a standard superhero game, Prototype is really more about running amok through Manhattan as an unstoppable force of nature. Its protagonist, Alex Mercer, has been infected by a virus that’s turning everyone else into zombies and oversized mutants, but in his case has just given him amnesia and a fat portfolio of really gross superpowers. As the island gradually descends into zombie-infested chaos, Alex has to contend not only with swarms of increasingly monstrous infected, but also with the trigger-happy military, who are hell-bent on killing him before he uncovers the truth about his identity.

To help him survive, Alex has a staggering array of powers and special attacks, most of which revolve around turning his arms into weird implements of destruction. Busting out a set of claws enables him to slash his enemies to ribbons and impale them with underground spikes, while the telescoping “whipfist” can slice large crowds of enemies (or civilians) in half, hit distant enemies and grab helicopters for easy skyjacking. His “hammerfist” power turns his hands into huge, heavy spheres for blunt-force trauma, and transforming one of his arms into a single huge blade enables him to slice open tanks in seconds. Infrared and “Infected” vision powers help him single out enemies when the action gets too thick, he can grow a suit of armor to protect himself from the game’s tougher enemies and - when his health is either really high or really low – he can bust out massive “Devastator” attacks capable of killing everything around him.

Oh, and he can fly. Or something awfully close to it, once you’ve fully unlocked his air-dash and gliding abilities. Used in tandem, they can give you a boosted glide that’s good for covering large distances in a hurry. Finally, Alex is able to use any weaponry dropped by soldiers, ranging from M-16s to heat-seeking bazookas, although this aspect doesn’t get really cool until you’ve gained the ability to call in airstrikes or jack tanks and helicopter gunships. (That said, the canned animation that accompanies every tank-jacking could have stood to be a lot shorter, as Alex’s posing makes it more likely he’ll get knocked off the tank by a rocket before climbing inside.)

You’ll need to play for a while before you earn all this stuff, of course, but Prototype plays it smart by starting out near the end of its story, offering a quick taste of what full-powered Alex can do in a completely infested Times Square. Once that’s over, you’re sent – via flashback - to square one. The city quiets down and you’re left pining for those kickass abilities, which have been reduced to just sprinting up walls, throwing cars and chunks of scenery, and absorbing people to get a health boost and the ability to disguise yourself as them.

Thankfully, you’ll feel like you’re earning those powers back quickly. In its first few hours, Prototype rewards you with tons of “evolution points” for every mission you accomplish, every military base you clear out and every infected fiend you consume, enabling you to unlock awesome new powers every few minutes. It’s not until fairly late in the game that a feeling of grinding through levels sets in, although by that point the upgrades are strictly optional, and you’ll have unlocked so many that you’ll probably have a hard time keeping track of them anyway.

Above: Seriously, there’s like 113 of these things to unlock

There’s one caveat: the more powerful you become, the more likely you are to notice one of Prototype’s central flaws: the controls are great for blasting around like a high-speed madman, but they can be a tantrum-inducing bastard when you need them to be precise. If you’re trying to scale narrow surfaces (like the pinnacle of the Empire State Building, for example), you’ll need to take it extremely slow if you don’t want to leap out into space – and even then, Alex might inexplicably hurl himself off the building with no input from you. Similarly, the game’s rooftop races can quickly turn frustrating if you’re not careful, as a careless flick of a thumbstick while air-dashing can send Alex careening in the exact opposite direction you wanted, usually off a building.