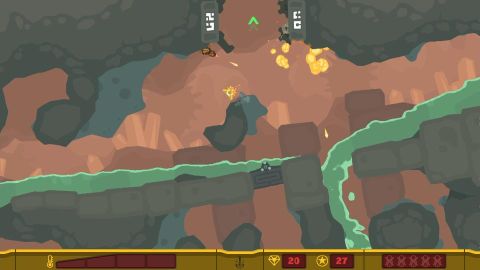 Any pretense of a relaxing experience akin to the original PixelJunk Shooter gets dispelled immediately at the beginning of the first level. Sure, the first game had its hectic moments, but PixelJunk Shooter 2 is less a sequel and more a series of levels extending logically from where the first game left off. Indeed, Shooter 2 even starts literally seconds after the end of Shooter 1: after defeating the giant mech deep inside the planet, you're swallowed by a giant beast. The first level of Shooter 2 starts off inside the beast's guts.

Shooter 2 doesn't just follow Shooter 1 in story – it also follows it in difficulty. The game assumes you already know how to play and it throws environmental dangers at you right away: not moments into the game and digestive acids from the giant beast seep in and cause the already narrow intestinal passageways to become alarmingly thin and dangerous. The game only becomes more difficult, and we're surprised to say that on some levels we died perhaps twenty times before succeeding, which is a failure rate way beyond that of the original.

The central gameplay is basically the same as the first time around: it's a twin-stick "shooter" but focuses on puzzle elements instead of constantly blasting enemies. The enemies are more numerous this time around, but it's still not even remotely like your typical scrolling shooter, with navigation of twisting corridors and flipping switches to activate environmental effects still the main component of gameplay.

The way that Shooter 2 riffs on these elements is wonderfully creative. On top of the always-fun "suits" from the first game (Magma, Water, Inverse, Anti-magnet), there are also two new suits that entirely change the way the game is played. The first is the Hungry suit, which attaches a goofy snout to your ship and allows you to eat your way through the soft flesh inside the giant beast of the first few levels. The fun here is that the game kind of becomes the old arcade classic Dig Dug, with you boring tunnels through the walls and carving holes underneath boulders so that they fall upon and crush enemies.

The other new suit is something we don't want to give away because the way it's introduced has an amazing tension releasing effect. We'll just say that you'll find it in a series of levels where you're flying through pitch-black tunnels infested with ghosts that come after you whenever you leave the safety of the light. These levels are emblematic of Shooter 2's inventive playfulness with the environment: aside from the light/dark areas and the aforementioned beastly stomach acids, there are areas infested with multiplying eggs that hatch into insects when doused with water, areas full of bubbles that throw your ship into out-of-control careening (but which can be managed by latching onto fleshy nodes with your grappling arm and then swinging around like a space monkey), and entire levels filling with lava that you must outrun in a frantic race to escape.

While the base gameplay hasn't really gotten more complicated, the challenges presented have become much more so. Not only are the environments constantly deadly with small margins of error allowed, but the enemies have become more devious. In particular, the game actually introduces invincible turrets that release bullet-hell sprays of projectiles in ridiculously complex and threatening patterns. In typical PixelJunk fashion, though, these enemies don't merely present a bullet-dodging challenge and instead can be "shut up" by latching onto them with your grappling hook – but of course you must get horrifically close to grab onto them.

The bosses have also become way, way more dangerous than in the first game. The second boss killed us easily fifteen times, and the last boss was so absurd that we actually couldn't beat him at all, which is rather disappointing after the first Shooter provided a decent but manageable challenge. Both games force you to start an area over from the beginning if you die, but the first game didn't really make that too noticeable – here, it's a bit unreasonable. Imagine fighting a boss for literally five minutes, dying, fighting those five minutes again just to get back to that hard part, and then dying instantly again. We did this over and over with the last boss, and having made no real progress, gave up.

PixelJunk Shooter 2 is a great game just like its predecessor, but be prepared for a significantly greater challenge. The unique vibe is as cool as ever, with possibly even more head-thumping music than before and simple, eye-pleasing visuals to round out the aesthetic package. There’s multiplayer too, with an interesting battle system and ranked matches but we found it a bit difficult to encounter other players online so who knows if it will pan out into something with legs, even with its item purchasing system designed to provide a slightly RPGish progression. There’s no arguing that Shooter 2 gives you more of everything you got the first time, which unfortunately includes more frustration. The package as a whole is excellent, though, and no fan of the original will be disappointed by what it offers.