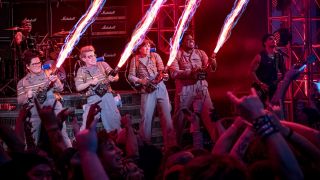 It might be time to call someone else. It doesn’t sound like the 2016 Ghostbusters reboot will be getting a sequel anytime soon. In fact, Ghostbusters creator Dan Aykroyd lays the blame fully at director Paul Feig’s door in a pretty pointed rant. Check it out below.

Speaking on the UK morning show Sunday Brunch (via /Film), Aykroyd opened up about what he liked and didn’t like about the movie. The good stuff: he was a fan of the all-female cast but, oh boy, he didn’t hold back when it came to Feig.

“The director [Paul Feig], he spent too much on it. He didn’t shoot scenes we suggested to him and several scenes that were going to be needed and he said ‘nah, we don’t need them.’ Then we tested the movie, and they needed them and he had to go back. About $30 to $40 million in reshoots. So, he will not be back on the Sony lot anytime soon.”

It turns out Sony don’t like burning money, who’d have guessed it? Besides that, it’s not often we see higher-ups speak out to openly and with such disdain as Aykroyd did so, if nothing else, get the popcorn out and enjoy the video a few more times.