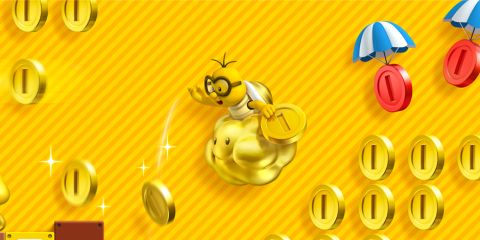 In 2006, New Super Mario Bros was quite the novelty. Back then, it had been over a decade since the last 2D Mario game, and it was warmly received on Nintendo DS. Compare that fanfare to today’s gaming landscape, in which New Super Mario Bros is now one of Nintendo’s best-selling franchises. The series is so ubiquitous that a sequel needs to be more than just another retro-flavored platformer to deliver something special. New Super Mario Bros 2 offers up some interesting new techniques -- most of which involve collecting thousands of coins -- but it plays things too safe, and ultimately falls short of its pedigree.

As is the custom, all the trouble starts when Princess Peach is kidnapped by Bowser and his Koopalings, sending Mario and Luigi into action. The gameplay that defined a genre is intact, as are the themed worlds to explore. The Desert, Ice and Lava Worlds are all there, laid out in a similar fashion that all build to a boss fight against a Koopa Kid, and of course, a victory sends you to the next world. The whole package is still entertaining on a primal level, but it’s also becoming very predictable.

NSMB2’s big new addition is a heavy emphasis on collecting coins. Increasing your score to earn bonuses has always been a part of the franchise and the genre in general, but NSMB2 expands on it like never before in Mario history. Coins aren’t merely for gathering 100 to earn an extra life, this one keeps track of every coin you pick up, and the ultimate goal is to reach a million. NSMB2 attempts a philosophical shift in one of the core ideas of Mario and for much of the game it succeeds.

For years, the life counter in Mario games has continued to lose meaning. The early Mario titles made each life count by withholding continues or penalizing your progress in some way, but in contemporary Mario titles, those penalties have been missing. Your collection of lives became essentially meaningless, making coins even more pointless. By increasing the overall importance of coins and making it much more than collecting an extra life, coins can again be used as incentive to challenge the player more in each new stage. Theoretically this makes NSMB2 the toughest Mario in some time, but the challenge is only there if you want it.

NSMB’s coin placement throughout the stages keeps pushing you to try new things, attack enemies you’d otherwise avoid, and search for more secrets. It becomes a tool for the developers to direct casual Mario fans into more high level play, but takes it easier on them by making it mostly optional. Even with this casual inclusion, NSMB2 challenges experienced players in a way the New Super Mario Bros franchise failed to do so far. If you think all of the games in the series are made for Grandma, this sequel will change your mind.