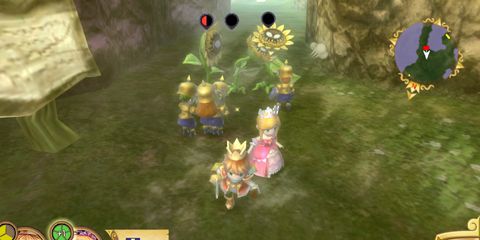 Creating genre-bending mash-ups is a tricky business. When Little King's Story debuted on the Wii in 2009, it was met with a healthy dose of critical acclaim, but it was ignored by many gamers. Now that the game has been re-imagined on the PlayStation Vita with an updated story and controls, another wave of platform owners will have the opportunity to experience its combination of real-time strategy, world planning, and relationship management. In many ways, the quirky Japanese mixture is adorable and addictive. Unfortunately, it doesn’t quite reach its full potential, failing to take advantage of all the opportunities afforded to it by the Vita platform.

As the story opens, your Little King has some big problems. His castle is under attack by mysterious enemies, and he has to quickly escape with a small number of his court to stay alive. They emerge far away and take up residence in a sparsely populated area, tasked with rebuilding the kingdom from scratch in order to reclaim what’s theirs. Over time, the King has to earn money to establish all the resources to create a kingdom, including guilds, schools, hospitals, and more; exploring the world to defeat enemies and capture treasure is the way to make that happen.

The Little King doesn’t do any of this on his own. In a manner reminiscent of Pikmin, he recruits local people to join him and assigns them jobs. Farmers dig holes to uncover treasure, carpenters build bridges, soldiers do battle, and so on. Taking the right mix of people with you on an excursion is crucial; without a carpenter, for example, you may not be able to reach your objective. It’s a blast to figure out the right combinations, so long as you don’t mind the occasional deaths of ill-prepared-for-combat citizens when attacks inevitably occur.

Those attacks come often, and much of what you wind up doing centers on combat. Whether it’s a random encounter with one of the wildly varying enemies--giant chickens, flying owls, and bizarre winged cows to name just a few--or the crucial monster fights that open up new territories to develop, the core of New Little King Story is perfecting the nuances of battle. The challenge of finding the right mix of ranged and close-attack fighters, learning the idiosyncrasies of formations and when to attack, pull back, or live to fight another day is intense. Ultimately, all that tinkering makes conquering your foes supremely satisfying.

One thing that’s not satisfying is the controls. While it’s easy to line up various groups for battle using the face buttons, neither the touchpad nor right stick (both of which you can use) is precise enough to make them charge at the right targets on a regular basis. It’s merely an annoyance early on when battles are simple, but as the fights get bigger with lots of combatants on both sides, the lackadaisical controls are a big deal.

The opening two hours or so give you a false sense of security and ease; every step you take is explained in detail by the various members of your court. From assembling the early vestiges of your Royal Guard to building out parts of your town to accepting quests, you’re given information aplenty. Shortly afterwards, though, that all dries up and you’re on your own to figure things out. With no training on battle tactics, vague notions of which quests will help advance the story, and criminally poor explanations of using alchemy to craft items, frustration can ensue. Veterans of the 2009 version of the game on the Wii may scoff at this complaint, but considering that a healthy percentage of the Vita audience may be unfamiliar with the original, this oversight can’t be overlooked.

The camera can also be vexing. As you go around town giving your citizens jobs, the viewpoint makes it tough to see which buildings you should use--and to make matters worse, the extremely unhelpful map doesn’t highlight these locations either. Important areas are often obscured, which is acutely problematic during fights. While there is a modicum of camera control, you’ll wind up fighting it as often as you do enemies. Another recurring issue is slowdown, which happens when there’s a lot of action happening on screen and the number of combatants gets north of twenty.

While these issues detract from the overall experience, they don’t diminish the lovely spirit of the game. There are countless moments of beauty, both in-game and in your mind. Hearing the little soldiers scream “CHARGE!” as they defy death--simply because you told them to--listening to the whimsical orchestral soundtrack as you and your minions bound across the landscape, and watching your team start to chat with each other while others are busy performing tasks are all deftly subtle delights. The best moments are reserved for when you crack the code of a particularly difficult boss battle; the feeling of satisfaction is tough to beat.

New Little King Story is a nice companion for the Vita, offering a deep campaign and loads of action and strategy that can be played in portable-friendly chunks. While it doesn’t achieve universal greatness, its strengths outweigh its flaws and offers an original, addictive--if occasionally frustrating--experience.