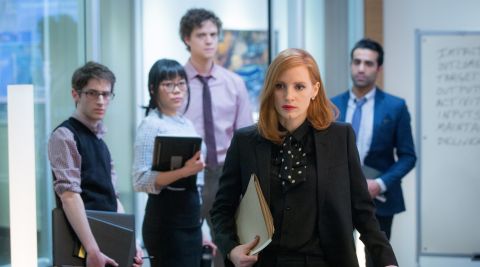 Chastain stalks the corridors of power with steely aplomb in Madden’s coolly compelling incursion into House of Cards territory.

Arriving in US cinemas just as Trump swept to office, this left-leaning story of a ruthless Washington DC opinion-former who takes on the might of the gun lobby didn’t misjudge the prevailing wind so much as miss the boat entirely. Dismal box office duly ensued, a fact gleefully interpreted by some right-wing gasbags as damning evidence of how out of touch liberal Hollywood had become with the rest of mainstream America.

Having failed to make much of an impression on the awards season as well (Golden Globe nod for Jessica Chastain notwithstanding), Miss Sloane will surely be seen as damaged goods by some now that it’s finally crossed the Atlantic.

To allow bad buzz to deter you from catching John Madden’s (Shakespeare in Love) latest, however, is to deny yourself a twisty, tense and engrossing look at Washington’s underbelly, which may actually benefit from having a little bit of distance between it and last year’s election and referendum upsets.

For as much as Miss Sloane is about politics, it’s also about a woman – the titular Elizabeth Sloane, a driven lobbyist who freely admits she’s “a gold medalist in ethical limbo”. (In case we don’t get the message, she’s also called “the personification of an ice cube” and “the poster child for the most morally bankrupt profession since faith healing”.)

Tough, smart and obsessed with victory, she enters the frame at the top of her game: the ideal person, in other words, to slap down a new piece of gun-control legislation that’s anathema to her company’s roster of wealthy blueblood clients.

When tasked by boss Sam Waterston to vanquish it, though, Liz unexpectedly jumps ship for a non-profit outfit determined to get it passed. Is this a sign there’s a warm heart beneath that tough exterior? Or is she simply in it to win it, regardless of what it means for her principled new employer (Mark Strong), or a young associate (Gugu MbathaRaw) with a tragic history that’s ripe for exploitation?

That we’re never sure which is a testament to Chastain’s riveting central performance – her finest, indeed, since Zero Dark Thirty – and an accomplished first script by ex-lawyer Jonathan Perera that unsurprisingly made it on to the fabled ‘Black List’ of promising unproduced screenplays.

OK, so any film whose plot involves a robot cockroach, an honourable gigolo (Jake Lacy) and an inflatable rat can’t help having a few credibility issues. Put them to one side, though, and you’re guaranteed a sleek thriller, in the Michael Clayton mould, whose classy ensemble (see also John Lithgow, Michael Stuhlbarg and Alison Pill) means Chastain has to work very hard for every one of her scene-stealing moments.

Chastain stalks the corridors of power with steely aplomb in Madden’s coolly compelling incursion into House of Cards territory.