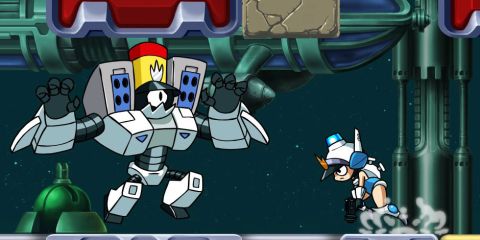 If you’re new to the eShop, you’ll definitely want to check out Mighty Switch Force: Hyper Drive Edition. An upgraded port of the 3DS title, Mighty Switch Force: HDE is a smartly designed puzzle-platformer that features a nice array of challenging stages and looks absolutely fantastic on a high-definition screen. It’s easily one of the finest digital offerings available on the 3DS, so there’s no question it would make a fine addition to any Wii U owner’s library.

If you’ve already played the original title, you’re probably wondering if there’s enough new content in this HD edition to justify purchasing it again. Fortunately, the answer to this is an emphatic yes; Mighty Switch Force: HDE uses the original 3DS title as a foundation, doubling its level count and adding some Wii U-specific features to an already fantastic adventure. This makes Hyper Drive Edition the definitive version of the game and a must-have for the system, especially if you missed out on WayForward’s inventive platformer the first time around.

Right from the start, the most noticeable change in the game’s jump to a home console is its new high-definition visuals. Each asset has been completely redrawn to take advantage of the Wii U’s added horsepower; backdrops sport considerably more detail than their handheld counterparts, and character sprites are much more expressive and animate beautifully. WayForward’s expertise with 2D artwork really shines through in the title, making it one of the finest visual experiences on the platform even when judged against full retail releases.

While the game’s presentation has been touched up, the core gameplay remains largely the same. You’ll guide robo-officer Patricia Wagon through all of the original levels, solving puzzles and hunting down the escaped convicts hiding in each stage. To do this, you’ll have to use her unique dimension-shifting abilities, which activate different objects scattered around the environment. The levels all make great use of this mechanic, forcing you to switch between dimensions rapidly to scale to the top of block stacks or zip around via warp cannons. They’re also consistently engaging, introducing a new gameplay element for you to master with each successive stage. Later missions in particular get quite challenging thanks to the devious ways these elements converge together, and you’ll feel incredibly smart when you figure out how to use your dimension-switching abilities to capture an out of reach convict.

This leads into the other big addition to Hyper Drive Edition, the eponymous “hyper” stages, which are remixed variations of the game’s existing levels. These are likewise cleverly designed and very rewarding to complete, offering a fresh take on the game’s dimension-switching mechanics while bumping up their difficulty. They also address the original title's biggest flaw by adding some much-need longevity to the adventure.

In fact, the game’s only real flaw now is that these new levels aren’t available from the start. You’ll have to play through each of the original 21 stages before you can unlock their hyper variations, which may come as a slight annoyance to those who’ve already played the 3DS version ad nauseam. To be fair, this is hardly a major criticism; the original levels are fun enough that you won’t mind racing through them again, especially now that you can share your clear times with other players via Miiverse. Still, it would have been nice to have the option of jumping directly into the new content.

That said, even if you’ve already played the 3DS version, Mighty Switch Force: Hyper Drive Edition is a fantastic title that all Wii U owners should check out. The game offers a satisfying blend of platforming and puzzle elements, complemented by a host of new stages and beautiful HD visuals. It may not be a true follow-up to the handheld effort, but it’s easily the best version of it, which is certainly high praise considering the game was great to begin with.