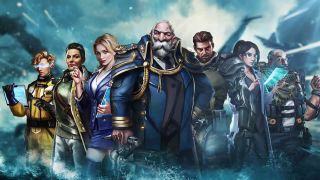 Over the many decades in which aliens have tried and (usually) failed to conquer Earth in all manner of popular entertainment, they seem to have forgotten one vital weakness in humanity that could have given them that much needed edge. We’re land mammals, and a world without its terra firma is one in which most would struggle to survive.

The aliens of Sea Fortress, then, are smarter than most, submerging earth in an endless ocean that has forced the last remaining remnants of mankind to adapt and take to the water on all manner of technologically advanced watercraft. The free-to-play strategy game from prolific mobile developer IGG thus pits you, as leader of this last stand for humanity, against the nautical alien force, as your fight for survival takes place across expansive aquatic landscape, all beautifully rendered in smooth 3D visuals.

The good news is that you have a huge amount of resources with which to fight the enemy, from towering aircraft carriers and deep sea submarines to heavily armed battleships and awe-inspiring destroyers, all of which can be upgraded with new abilities and traits as they prove their mettle in combat.

Mixing and matching between different ships within your fleet isn’t only a fun way to express your military style on the battlefield, it’s part of Sea Fortress’ deeply strategic gameplay. Not only that, but you’ll be supported by a tech-savvy and battle-hardened crew of legendary heroes to assist the war effort, each equipped with their own personalities, skill trees, upgrades, and promotion opportunities within your military rankings.

Sea Fortress rides on that familiar yet endlessly addictive gameplay loop of expanding your base while engaging in offensive and defensive measures against both AI enemies (via the game’s comprehensive single-player campaign) and human foes in the game’s online PvP component. Outside of the real-time combat, you’ll also have the chance to explore the depths below for ancient relics of the old world, research new technology to improve your chances of survival, or hunt down monsters like the fearsome Cybers, some of Sea Fortress’ toughest enemies in existence.

Sea Fortress will be available to play for free on May 10, when you’ll be to download the game on iOS and Android devices from the Apple Store and Google Play Store respectively. IGG itself is a respected and seasoned developer of mobile games, with an extensive back catalogue of acclaimed titles to its name, including the hugely popular strategy game, Lords Mobile. Head over to the company's official site for more details about its history and profile.

Check out the best gaming phones to buy right now by clicking on the link, or watch the video below for a round up of the week in entertainment ahead.