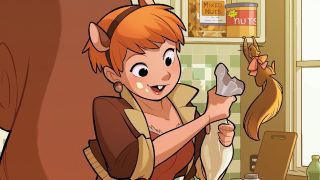 We all knew the odds of Marvel's Squirrel Girl coming to the big screen were pretty low. But in light of news that a TV series starring the quirky hero is coming in 2018, I'll settle for the small screen.

According to The Hollywood Reporter, Squirrel Girl will join other D-list Marvel heroes in a live-action comedy series dubbed "New Warriors." In case you're not familiar, much like The Avengers or The Defenders, the New Warriors are a rotating group of superheroes who come together to fight threats they couldn't handle on their own.

Squirrel Girl is the only confirmed hero on the roster thus far, and THR describes her as "a natural leader," so it sounds like she'll be getting plenty of time in the spotlight. As for who will play the rodent-themed heroine, no names were given. Anna Kendrick previously said she'd be down for the role, but I imagine she's too busy for an ongoing series.

New Warriors will be headed by Scrubs writer and Cougar Town creator Kevin Biegel. It's scheduled to air 10 episodes on Freeform - formerly known as ABC Family - sometime next year.

Curious what the rest of the Marvel heroes are up to? Spidey's suit has it's own Jarvis and Thor's rocking a new haircut, for starters.