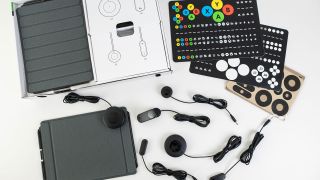 Last year, Microsoft asked Mark Starret, the senior global product manager for Logitech for joysticks. His response was ,"How many?" But it wasn't until this September that Starret would discover the grander scheme behind this strange request.

Gamers may not agree on much, but a motto we can all get behind is that games should be for everybody. Unfortunately, for people with limited mobility or those who lack fine motor control, playing with even the best modern controllers poses some serious problems. Thankfully, developers like Microsoft took notice and debuted the Xbox Adaptive Controller, the first controller designed specifically for gamers with limited mobility. This massive, customizable controller represented a quantum leap in the right direction as far as accessibility was concerned, but no official support existed for the various inputs, forcing players to rely on third-party solutions that would be supported by the controller. The lack of standardization and support was stunting the potential of this controller, not to mention making it prohibitively expensive.

Jump back to Starret and the Logitech design team, who are trying to make accessibility… well, more accessible. This ultimately resulted in the Logitech Adaptive Gaming Kit, the first official collection of controllers and accessories for the Xbox Adaptive Controller. Development on this kit started about six months ago and is the result of partnerships with Microsoft, Ablegamers, Special Effects, Mt. Sinai hospital and most importantly, numerous gamers with accessibility needs. It's the end result of an exhaustive design and testing process to ensure that everything down to the box and packaging of this kit are built with limited motor skills in mind.

The core of the kit is a vast collection of buttons and triggers, which come in a variety of sizes and sensitivities, as well as a pair of pressure-sensitive triggers. All of these inputs use the same 3.5mm connection, making them usable with any input on the Xbox Adaptive controller and remappable through the Adaptive controller software. Large stickers that are included with the kit can be applied to each input to differentiate them. In total there are three large buttons, three smaller ones, four "light-touch" buttons that require less actuation force, as well as a pair of variable pressure triggers. A large, flexible velcro mat provides an adjustable surface to place each input and ensure they remain stationary. Even the box of the kit was designed with accessibility in mind, with packaging secured with loops and velcro which requires no additional tools to separate.

The analog sticks still remain a bit of a challenge to emulate and aren't included in the kit. But the Xbox Adaptive Controller has inputs on either side of the controller for any USB compatible joystick as well as two dinner plate-sized inputs on the face of the controller designed to emulate analog joystick inputs. While Starret couldn't comment on any current projects that Logitech is undertaking to expand the types of control this system will offer, he did state that this current kit doesn't represent the end of Logitech's commitment to bring play to everyone.

The Logitech Adaptive Control Kit is launching later this month and will cost $99, with the already available core unit of the Xbox Adaptive Controller costing an additional $99.